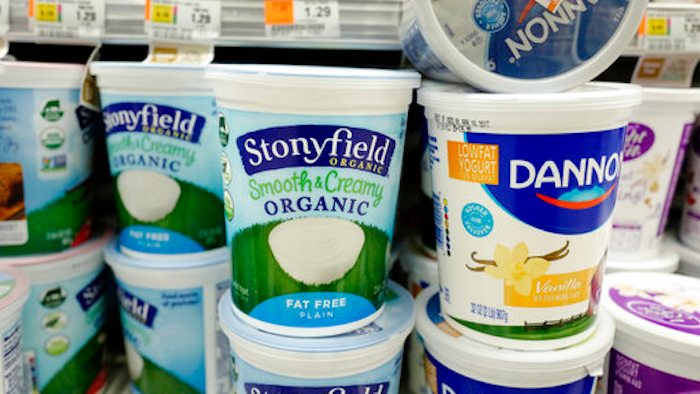 Stonyfield and Dannon yogurts are stacked on a supermarket shelf, Tuesday, April 4, 2017, in New York. Danone will sell its Stonyfield Farms business to gain approval from the U.S. for a $12.5 billion buyout of Denver's WhiteWave Foods, doubling the size of the French company's business in North America.
AP Photo/Mark Lennihan

NEWARK, N.J. (AP) — Danone will sell its Stonyfield Farms business to gain approval from the U.S. for a $12.5 billion buyout of Denver's WhiteWave Foods, doubling the size of the French company's business in North America.

The Justice Department said it would approve the deal if Stonyfield were sold, citing the potential for reduced competition in the organic milk market.

The department had been particularly concerned about a long-term strategic partnership and supply and licensing deals between Danone S.A. and CROPP Cooperative, a WhiteWave rival.

The Justice Department believed that the sale of Stonyfield Farms to an independent buyer would cut the ties between Danone and CROPP, and maintain competition.

The sale of Stonyfield will help "ensure competitive marketplaces for both farmers in the northeast that sell raw organic milk and consumers who purchase fluid organic milk in stores nationwide," the Justice Department said late Monday.

Danone plans to sell Stonyfield in the months after the closure of the WhiteWave deal, first announced over the summer.

Danone Buys Organic Foodmaker for $10B