Radiation Not the Biggest Health Impact from Fukushima

Doctors say the health of Fukushima residents has been hit harder by stress from evacuation and relocation, changing lifestyle and diet, as well as lack of exercise. 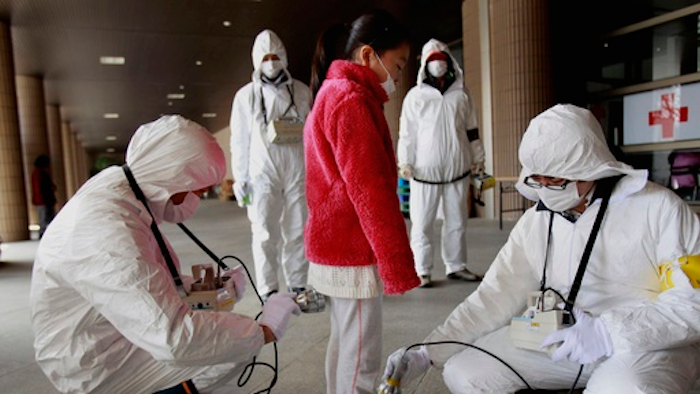 In this March 24, 2011 file photo, a young evacuee is screened at a shelter for leaked radiation from the tsunami-ravaged Fukushima Dai-ichi nuclear power plant in Fukushima, northeast of Tokyo. Doctors say over 180 thyroid cancer cases among Fukushima youngsters found since the nuclear accident cannot be linked to radiation, which they say is not the region’s biggest cause of health problems.
AP Photo/Wally Santana, File

TOKYO (AP) — The 185 cases of thyroid cancer found in youngsters in the Japanese region hit by the 2011 nuclear disaster cannot be linked to radiation, doctors said Thursday, describing that as not the biggest cause of residents' health problems.

A team of doctors from Fukushima Medical University conducting a health survey of Fukushima residents found 185 cases of malignant or suspected thyroid cancer in children. Ongoing thyroid checks are being done in phases on the 380,000 people who were 18 or younger and in Fukushima when the March 11, 2011, earthquake and tsunami triggered meltdowns at three reactors.

The doctors said more thyroid cancer cases were found due to the blanket screening, not the radiation that leaked from the plant. They say evacuees' stress and changing lifestyle have prompted obesity and diabetes, increasing the risk of strokes and heart problems.

"Those thyroid cases have been found because we conducted the survey, not because of the radiation," said Akira Ohtsuru, an expert on radiation and thyroid ultrasound examination at the university. "The survey has caused over-diagnosis."

Ohtsuru said the blanket survey is likely to be finding many thyroid cases that are never noticed otherwise.

Thyroid cancer is among the most curable cancers, though some patients who have their thyroid removed need lifelong medication and regular checks.

Still, children and their parents fear a stigma against such illnesses in Japan where normalcy is highly expected.

Thyroid irregularities have been found at a similar rate in three other prefectures in southern, central and northern Japan, said another doctor, university vice president Koichi Tanigawa, adding that the radiation is not the biggest impact on the health of the Fukushima residents. Their health has been hit harder by stress from evacuation and relocation, changing lifestyle and diet, as well as lack of exercise, he said.

A study by his team member Tetsuya Ohira has found obesity, diabetes, liver and heart problems have increased among older evacuees compared to their health check results before the tsunami, a sign of increased risk of developing stroke, heart attacks and other cardiovascular problems.

The Fukushima disaster at one point forced more than 150,000 people to abandon their homes. The number has significantly decreased, as more areas have been decontaminated and the government pushes to showcase the reconstruction and have as many former residents as possible to return home. Subsidies for evacuees outside of Fukushima will be cut later this month.

International studies on Fukushima have predicted that cancer rates will not rise as a result of the Fukushima accident, though some researchers say thyroid cancer rate in the prefecture is higher than what is generally found and could be related to the radiation.

Ohtsuru did acknowledge there are still unknowns about the radiation impact on human health, citing the need for a long-term survey.