Producers are seeing a steep drop in sap. 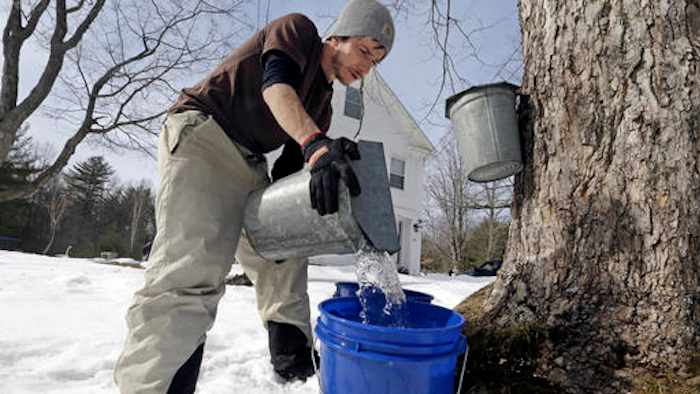 Producers joined climate experts and Democratic U.S. Sen. Maggie Hassan of New Hampshire on Tuesday to talk about the state's changing climate and how it is affecting one of the state's most important industries.

Some producers talked of seeing a steep drop in the amounts of sap they are getting, while others are dealing with another trend attributed to warmer temperatures in which the sap goes up to the top of the trees rather than down to taps. Others complained about a drop in the sugar content of their sap.

"When I purchased the farm in 2000, "I was getting 75 gallons of sap," said Ray LaRoche of LaRoche Farm in Durham. "With the environmental changes we've been seeing, it's down to 15 gallons. That's a dramatic loss for us. And I don't know what to do about it."

Hassan said the state's changing climate can have dramatic effects on the natural resources that "define us as a state and are critical to our economy, our environment, and our way of life in New Hampshire."

"Unfortunately, we are already seeing the real impacts of climate change on our economy — including on our maple syrup and ski industries," she said, referring to warmer winters and a decline in snow cover.

The ideal temperatures for sap production are in the 20s at night and 30s and 40s during the day. When the climate is in the 50s and 60s during the day and the nights stay warm, sap runs not to the taps, but to the tops of the trees, causing the tree to bloom. That can lead to a cloudy and off-tasting product.

"The other day we had a nice 50-degree day which is kind of the new normal but still not normal," said Jeff Moore of Windswept farm. "One of the challenges we've had to start weighing is when do we actually tap because putting a tap into a tree is a wound, the trees naturally act to try to compartmentalize that wound and wall it off."

The longer the tap has been exposed to the environment, the sooner the tree is going to wall it off, Moore said.

"When I was growing up," he added, "you didn't want to tap too early, because if you tapped too early you'd miss all of the good weather at the end of the season, when most of your sap is running. So that gets a little more challenging now."

But despite the challenges, some producers and experts at the University of New Hampshire say technological fixes are helping the industry adapt — and even extend the season.

"Climate change is man-made, and that's the good news," said Cameron Wake, who leads a research program at the University of New Hampshire that's investigating regional climate change. "Because if we caused the problem, we can fix the problem."