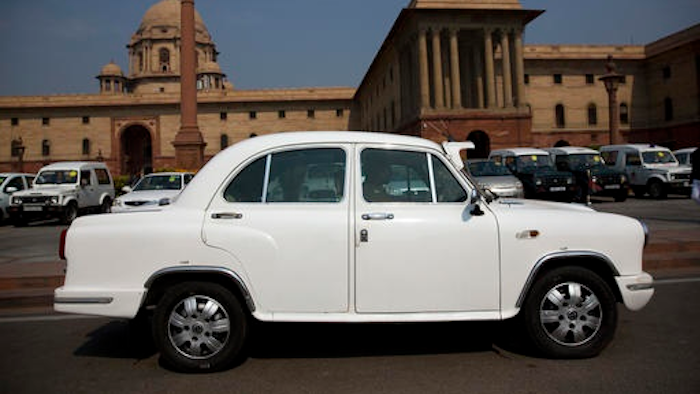 Hindustan Ambassadors car is parked outside the Secretariat Building in New Delhi, India, Monday, Feb. 13, 2017. First manufactured in 1948, the Ambassador was the only luxury car available in India till the mid-1980s. By the early 1990's, economic reforms had opened India's doors to many small car manufacturers.
AP Photo/Tsering Topgyal

NEW DELHI (AP) — French car manufacturer Peugeot has bought India's most iconic car brand from its maker Hindustan Motors in a deal that signifies the passing of an era in India's motoring history.

Over the weekend, the C.K. Birla Group that owns Hindustan Motors said it had signed an agreement with Peugeot SA to sell the Ambassador for 800 million rupees ($12 million).

The hulking Ambassador sedan remained largely unchanged for more than five decades, ferrying India's elite, including prime ministers, visiting heads of states and celebrities. It was a throwback to an era when India's policy of economic self-sufficiency meant domestically produced cars were the norm.

First manufactured in 1948, the Ambassador was the only luxury car available in India till the mid-1980s. By the early 1990's, economic reforms had opened India's doors to many small car manufacturers.

Fondly referred to as the "Amby," the Ambassador was modeled after the British Morris Oxford III. Its lumbering shape, often compared to a bowler hat on wheels, was suited for India's pot-holed roads and rugged terrain. But poor gas mileage and a lack of luxury features led a rising Indian middle class to aspire to own cheaper, newer models that were easier to maneuver in crowded cities.

Displaced by Japanese and Korean cars, the sturdy Ambassadors were relegated to use by taxi services and government departments. But even that has changed with the Indian government switching to smaller, swifter cars than the bulbous Ambassador.

It is unclear what exactly the French car maker plans to do with the Ambassador brand.

Peugeot pulled out of India after a joint-venture effort in the 1990s collapsed. Last month it signed an agreement with Birla to return to the fast-growing market, saying it will invest $107 million in a Hindustan Motors manufacturing facility in the southern Indian state of Tamil Nadu.

That deal includes hiking manufacturing capacity to 100,000 vehicles a year, to take advantage of the rapid growth in India, where car sales expanded 7 percent to 2.96 million cars last year.