Tough Challenge for Trump: Getting More Men Back to Work

The proportion of men in their prime working years who either have a job or are looking for one has been dropping for decades — and limiting economic growth in the process. 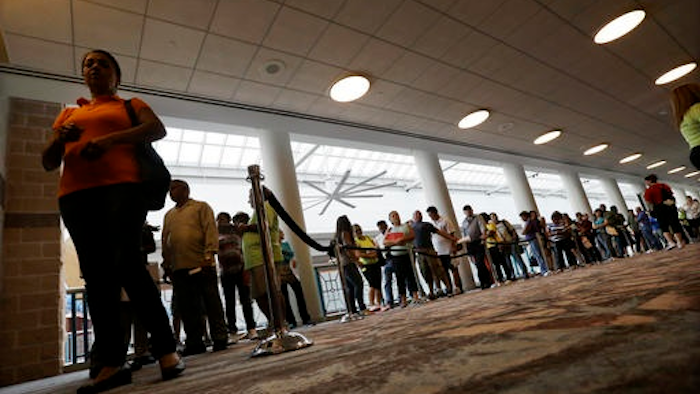 In this Sept. 3, 2014 file photo, people wait in line to sign up for unemployment in Atlantic City, N.J. The proportion of men in their prime working years who have a job has been steadily declining _ and holding back the United States’ growth potential. The full brunt of this 60-year decline became apparent during the 2016 election. Trump won the electoral college in large part by calling for more jobs at steel mills, auto plants and coal mines, the types of work that had once employed legions of men who lacked a college education.
AP Photo/Mel Evans, File

WASHINGTON (AP) — If President-elect Donald Trump is going to meet his pledge to energize the U.S. economy, there's a simple yet tough way to do so: Put more men to work.

The proportion of men in their prime working years who either have a job or are looking for one has been dropping for decades — and limiting economic growth in the process.

The full brunt of the 60-year decline burst into view during the 2016 election. Trump triumphed in part by vowing to restore jobs at steel mills, auto plants and coal mines — the types of work that had once employed legions of men who lacked a college education.

Bringing more non-college-educated men into the workforce is a Herculean challenge that has long bedeviled economists. Among the root causes:

— Automation. Factory robots and computer software have eliminated the need for many workers, wiping out an array of jobs that once provided a middle class lifestyle.

— Global competition. U.S. workers have been competing for jobs with cheaper foreign workers, a trend that's led to some offshoring of jobs and curbed pay in some industries.

— Criminal records. Stricter criminal laws have left over 20 million Americans with felony convictions and prison records — a fourfold increase from 30 years earlier. That background has made it hard for them to get hired.

— Prescription drug use. Nearly half of jobless men who are no longer looking for work are on pain medication, research has found.

"Many are dropping out of the labor force because they cannot find good-paying jobs in an economy operating near stall-speed," the Trump campaign said before the election.

To chart the problem and any progress Trump might achieve over the next four years, his team has pointed to an obscure gauge called the "labor force participation rate." This is the proportion of people who are either working or looking for work. It excludes anyone who's stopped searching for a job.

In the government's monthly jobs report being released Friday, it's a number that draws secondary billing after the unemployment rate and job creation. But beneath the sunny 4.6 percent jobless rate is the troubling shadow cast by the millions of men ages 25 to 54 who have dropped out of the workforce.

For this group, labor force participation has sunk to 88.5 percent from a 1954 peak of 97.9 percent. Most of that loss has occurred among men who have a high school degree or less, according to a report this year by the Obama administration. (Women's participation rate has declined less dramatically.)

The Trump team argues that it can lift the overall participation rate by reducing taxes and regulation, which it says would speed economic growth. But economists say increasing men's participation is difficult. The underlying causes are long-standing and go beyond the tax, trade and regulatory policies that Trump has attacked as the main hindrances.

For one thing, there has been a disappearance of "routine" manual jobs that required little education or high-tech skills — from machine operators to assembly line workers. These occupations have been displaced by such trends as automation and, to a lesser extent, outsourcing to lower-wage countries. The number of factory jobs has dropped 37 percent from the 1979 high to 12.3 million.

Routine manual jobs accounted for 23 percent of work in 1979, a share that fell to 15 percent by 2014, according to research by the economists Guido Matias Cortes, Henry Siu and Nir Jaimovich. They found that the loss of these jobs led many people to stop working. Those who did remain often accepted lower-paying work.

Faster economic growth might not raise the participation rate, said Siu, an economics professor at the University of British Columbia. If growth is fueled by greater use of technology, it could result in even fewer routine jobs and further depress labor force participation, he said.

On the other hand, if stronger economic growth came from improved worker skills and higher college graduation rates, labor force participation might rise.

One obstacle is that many men are unwilling to accept service sector jobs that are viewed as lower-paying women's work — from cooks to home health aides — said Betsey Stevenson, an economist at the University of Michigan who worked in the Obama administration.

"We are adding lots of jobs in the service sector, and the goods sector is shrinking," Stevenson said. "Trump can't really fix that because the magnitude of the decline is so big. He might keep some factory jobs for now. But technological change will prevent him from making that a true engine of job growth."

Still, other social forces, from mass incarceration to poor health, have contributed to the declining participation rate. Nicholas Eberstadt, an economist at the conservative American Enterprise Institute, notes that roughly 23 million Americans have felony convictions.

Having a prison record makes an American man three times as likely to drop out of the labor force compared with a man with no arrests, Eberstadt said.

Health problems and the opioid epidemic may also be a major barrier to work, according to research by Alan Krueger, a Princeton economist and former Obama adviser. Nearly half of men ages 25 through 54 who are neither working nor looking for work take pain medication daily, Krueger found.

All of which means the Trump administration might have to embrace a broader effort to increase labor force participation, one that addresses public health problems, the many Americans with criminal records and the displacement caused by increased use of technology.

However it might be achieved, the benefits from any rise in labor force participation could be substantial, said Douglas Holtz-Eakin, a former director of the Congressional Budget Office and now president of the center-right American Action Forum. Increasing the participation rate would serve both the economy and individual Americans.

"In terms of genuinely helping things, this is the place you really want to go," Holtz-Eakin said.