The plan would require the eventual phase-out of many of the nation's coal-fired power plants.

The letter sent to Trump and congressional leaders on Thursday is signed by Republican officials from 22 states and Democrats from the coal-producing states of Kentucky and Missouri.

The U.S. Supreme Court barred the Environmental Protection Agency from implementing the Clean Power Plan as lawsuits filed by more than two dozen states and fossil-fuel companies are weighed by an appeals court in Washington. The plan would require the eventual phase-out of many of the nation's coal-fired power plants.

A ruling in the case is expected soon. Trump has called the science showing climate change a hoax. 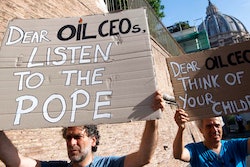