Five companies were caught collecting millions of dollars in subsidies for buses that were never made. 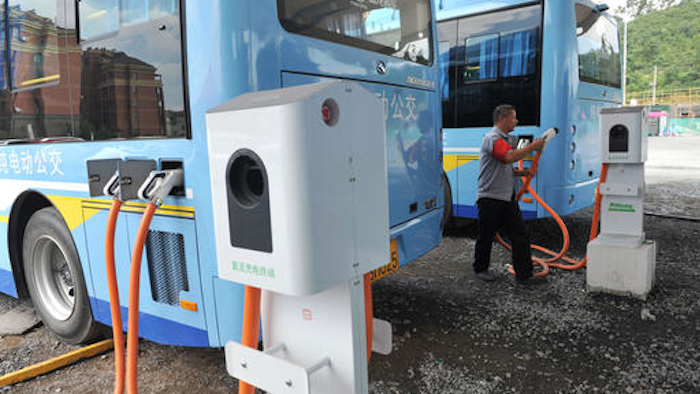 In this July 15, 2016, photo, a driver charges an electric bus made by King Long United Automotive Industry at a terminal in Lin'an city in eastern China's Zhejiang Province. China's electric vehicle industry, a flagship for Beijing's technology ambitions, has been rocked by scandal after five companies were caught collecting millions of dollars in subsidies for buses they never made.
Chinatopix via AP

BEIJING (AP) — China's booming electric vehicle industry, a flagship for Beijing's technology ambitions, has been rocked by scandal after five companies were caught collecting millions of dollars in subsidies for buses they never made.

The affair of the phantom buses has prompted questions about whether it might disrupt the ruling Communist Party's financial support to an industry it is spending heavily to promote.

The Finance Ministry says it has fined five manufacturers that fraudulently collected a total of more than 1 billion yuan ($120 million) in subsidies. The ministry said those were "typical examples," suggesting there might be more. Chinese news reports, citing unidentified industry sources, say as many as 72 other companies including Nissan Motor Co., Hyundai Motor Co. and major local brands Chery and Geely might be under suspicion.

The government gave no indication whether managers at the companies might be prosecuted. The Finance Ministry said 90 companies were investigated but didn't identify any of the others.

"'Subsidy fraud' will do a lot of damage to development of the new energy vehicle industry," the deputy general secretary of the China Association of Automobile Manufacturers, Xu Yanhua, told the newspaper Economic Observer.

Communist leaders see electric cars, solar and wind power and other "new energy" as promising fields with no established competitors where China can take a leading global role and reap higher-paid jobs and economic growth.

The biggest Chinese manufacturer, BYD Auto Ltd., passed General Motors Co. and Nissan last year as the top-selling electric vehicle brand. It was not among the five manufacturers cited as improperly receiving subsidies.

Most Chinese-made electric vehicles are sold in China, but BYD has buses on the road in California and taxis in Europe.

Beijing paid 33.4 billion yuan ($5 billion) in subsidies to electric vehicle makers in 2009-15, according to the Finance Ministry. On top of that, Shanghai and other cities encourage sales by waiving license plate fees of up to 100,000 yuan ($15,000).

A Cabinet statement said authorities were ordered to "tighten control" over subsidies. It told local authorities to prevent finance officials from helping automakers to obtain improper subsidies but did not indicate how payouts might change.

The scandal is likely to lead to stricter standards in a system that lacks controls to ensure companies that receive subsidies are creating technology, said John Zeng of LMC Automotive Consulting.

Zeng said for now, companies can collect government money for assembling parts bought from other suppliers to make a truck or bus while doing no research or development.

"Definitely, the government will keep a closer eye on this," said Zeng. "I think it's a good thing. All the money can be used more properly. Companies that are real and invested money in R-and-D will benefit."

The companies were ordered to return the subsidies and pay fines equal to 50 percent of the improper payments, the Finance Ministry said.

Spokespeople for Hyundai and Nissan declined to comment. The Chinese automakers did not immediately respond to questions.

Zeng said any additional abuses found by regulators will likely also be in the bus market because of the bigger payments and because auto sales can be tracked more closely when drivers register vehicles.

Beijing plans to phase out subsidies financed by public money in 2020 and instead pay automakers for each electric car sold by imposing a charge on gasoline and diesel vehicles.