The inaugural two-day event underscores how the once-illicit marijuana industry is starting to go mainstream. 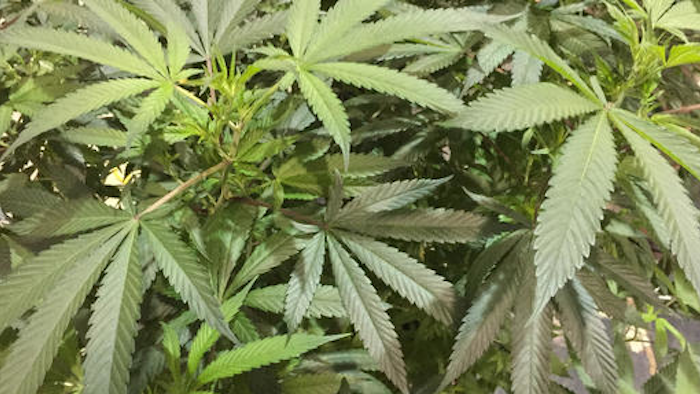 A Marijuana plant awaits judging in the Oregon Cannabis Growers' Fair marijuana plant competition in Salem, Ore., on Saturday, Aug. 13, 2016. Nine winners will be on display at the Oregon State Fair between Aug. 26 and Sept. 5, 2016, for the first time ever. The Oregon Cannabis Growers' Fair runs through the weekend in Salem, Oregon.
AP Photo/Gillian Flaccus

SALEM, Ore. (AP) — People flocked to Oregon's first-ever marijuana growers' fair on Saturday where a competition for best pot plants was being held, with the winners to be displayed at the Oregon State Fair.

The inaugural two-day Oregon Cannabis Growers' Fair underscores how the once-illicit marijuana industry is starting to go mainstream in Oregon, one of four states to have legalized recreational marijuana use, along with Washington, D.C.

Ed Rosenthal, known in pot circles as the Guru of Ganja, poked, prodded, rubbed and sniffed several dozen marijuana plants — some of which were so big they engulfed him in an exhibition hall on the Oregon State Fairgrounds. He and other judges were picking nine winning plants — three in each of three categories — that will be displayed at the Oregon State Fair for two weeks starting later this month.

Rosenthal, wearing a marijuana-leaf print shirt, scribbled on his clipboard as onlookers snapped photos and gaped at rows of pot plants. None had buds, per contest rules.

"The first thing is health and to make sure they don't have infections and then to make sure they ... don't have nutrient deficiencies. Then, we look at the structure of the plant: Has it been getting as much sun as it should be getting? Is it sunburned?" Rosenthal said.

Danny Grimm, owner of Uplifted, a cannabis farm, entered the competition and said that winning it could spur sales.

"It's great to put it on our portfolio and get publicity here and get our name out there," he said. "That is huge for the cannabis industry, and it's definitely a step in the right direction for us. We've been waiting for this for years."

Donald Morse, a pot grower who came up with the idea of holding the fair, was happy with the strong attendance on opening day Saturday. Segments of the industry, from seed providers all the way to a company offering mechanized bud trimmers, were among more than 80 exhibitors.

Reggae music thumped from Savant Plant Technologies' display on Friday as owner James Knox, 38, of Corvallis, set up his do-it-yourself grow package, including peat and microorganisms to stimulate plant growth.

"It's nice for us to be stepping across the line and say, 'Here we are, and we're ready to do business,' " he said. "For those of us who have been doing this a long time, this is a breath of fresh air because we're able to work openly and in the light."

The winning entries of the pot-plant competition will be displayed at the state fair with more traditional items like tomatoes, hogs and horses, but in a translucent greenhouse guarded by extra security. Only those 21 or older will be allowed to enter. It will be the first time cannabis will be exhibited at a state fair anywhere in the United States, organizers said.

"It is an historic event. It's a great opportunity to meet these growers that typically were underground," fair organizer Mary Lou Burton said. "We're trying to get people connected up and networking."

Business is already booming. Oregon's Legislative Revenue Office in May quadrupled its estimate of net state tax revenues, from $8.4 million to $35 million, expected from recreational marijuana through June 30, 2017.

Morse, who is also executive director of the Oregon Cannabis Business Council, said the growers' fair aims to demystify marijuana.

"It's not to tempt people to use marijuana," Morse said. "It is to educate. Cannabis is Oregon's newest farm crop."

Sewage Tests Prove Weed Use Up