Tesla Loss Grows as it Falls Short of Sales Goals 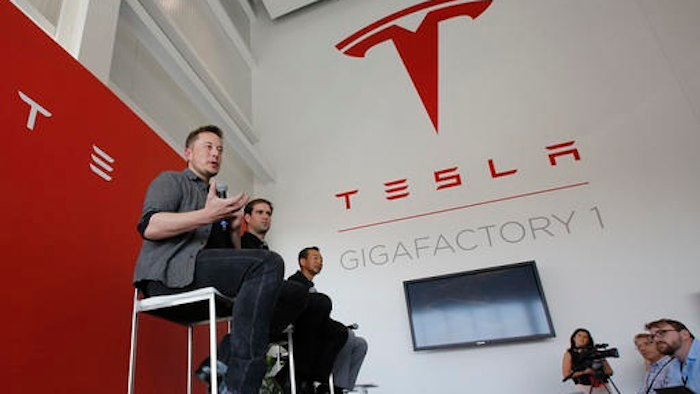 DETROIT (AP) — Electric car maker Tesla Motors Inc. ended its turbulent second quarter with a larger-than-expected loss but said it remains on track to increase production in the second half of this year and introduce a new car in 2017.

Tesla's second-quarter loss grew nearly 60 percent to $293 million as it delivered fewer vehicles than planned. The company produced 18,345 vehicles during the April-June period, a quarterly record, but many were produced so late in the quarter that it delivered only 14,402, which was short of its goal.

"Basically, we were in production hell for the first six months of this year," Tesla CEO Elon Musk said Wednesday in a conference call with analysts.

Musk said issues with suppliers were among the reasons for the agonizing ramp-up in production for the Model X SUV, which went on sale last fall. Complicated parts, like the SUV's gull-wing doors and free-standing second-row seats, were also issues.

Tesla's second-quarter loss, of $2.09 per share, compared to a loss of $1.45 per share in the same quarter a year ago. The 13-year-old company has only reported one profitable quarter, in 2013.

Revenue rose 33 percent to $1.27 billion. Tesla said the average price of its new Model X SUV is more than 15 percent higher than the Model S sedan.

Tesla said Wednesday 5,150 vehicles were still in transit at the end of the quarter and would be delivered early in the third quarter. It expects to deliver just under 80,000 vehicles worldwide this year, up from 50,500 in 2015.

It was a turbulent quarter for Palo Alto, California-based Tesla. Things started out well when reservations for the company's upcoming Model 3 sedan wildly exceeded expectations. Tesla began taking reservations March 31 and within a week it had more than 325,000 reservations for the $35,000 car, which is due out next year.

Tesla wouldn't give an updated number of reservations on Wednesday. Instead it reiterated the total of 373,000 that it released in May.

After taking in so many reservations, Tesla accelerated its production plans. The company now expects to make 500,000 vehicles by 2018, not 2020 as originally planned.

But things took a downward turn later in the quarter. In June, the government announced it would investigate Tesla's semi-autonomous Autopilot system after a driver using the system died in a Florida crash. That investigation is ongoing, but Musk insists the system is safe if it's used correctly.

Musk also said the government already had information on how Autopilot worked, so he didn't know why the investigation was opened.

Also during the quarter, Tesla announced its intention to merge with solar panel company SolarCity Corp., which is chaired by Musk and run by his cousins. Tesla has offered $2.6 billion for the company, and envisions a one-stop approach where customers could order solar panels through Tesla stores, hook them to Tesla's energy storage system and use them to power Tesla cars.

The merger must still be approved by government regulators and shareholders at both companies. If it's approved, it's expected to close in the fourth quarter.

Tesla's adjusted net loss of $150 million, or $1.06 per share, fell far short of analysts' estimate of a 59-cent loss, according to FactSet. But Tesla met analysts' expectations with its adjusted revenue of $1.6 billion.