Orders at U.S. factories dipped in May, dragged down by less demand for steel, aluminum, furniture, electrical appliances and military aircraft. 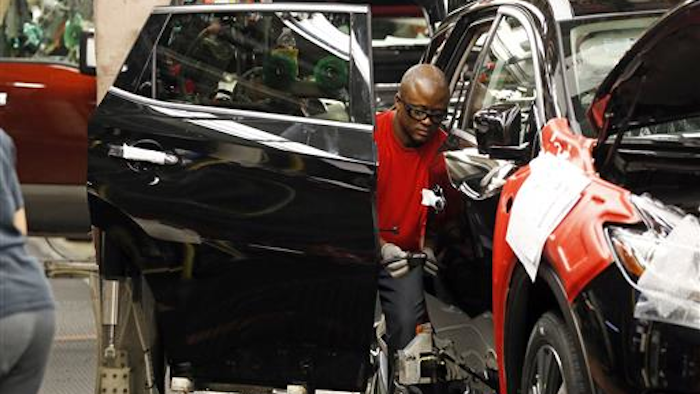 In this April 6, 2016, photograph, a technician works on a door assembly for a Nissan Altima on the line at the Nissan Canton Vehicle Assembly Plant in Canton, Miss. On Tuesday, July 5, 2016, the Commerce Department reports on U.S. factory orders for May.
AP Photo/Rogelio V. Solis

WASHINGTON (AP) — The Commerce Department said Tuesday that factory orders fell 1 percent in May, after gains in the two prior months. So far this year, orders for manufactured goods have dropped 1.9 percent to $2.2 trillion compared to the same period in 2015.

The decline suggests that U.S. manufacturers have yet to fully recover from the sting of weaker economic growth worldwide. Measures of factory activity increasingly look mixed, with some still showing the pain caused earlier this year by a stronger dollar hurting exports and lower oil prices leading to cutbacks in orders for equipment and pipelines.

Demand in a category that serves as a proxy for business investment —non-military goods that exclude the volatile aircraft category—slipped 0.4 percent in May.

Orders for military aircraft, a volatile category, plummeted 35.3 percent in May. The decline was compounded by drops in demand for military communications and navigation equipment. Demand for primary metals such as iron, steel and aluminum fell 1.8 percent. Orders for electrical appliance and furniture also tailed off.

Offsetting some of those declines was slightly greater demand for motor vehicles and machinery.

This hazy outlook for manufacturing may turn even hazier in the coming months, as European nations grapple with the vote two weeks ago by British voters to exit the European Union. The decision to leave has rattled financial markets around and fueled expectations that global economic growth could further deteriorate.

Not all manufacturing indicators have been negative.

The Institute for Supply Management's manufacturing index showed activity has been rising for four straight months. The index reached 53.2 in June. Anything above 50 signals growth.

But other indicators show that U.S. manufacturing continues to struggle, limiting the ability of the U.S. economy to expand faster. Until last month, the employment component of the ISM's index had indicated that factories were shedding workers. Since January, manufacturers have let go of 53,000, according to the Labor Department.

Orders to U.S. factories for long-lasting manufactured goods also dropped in May. The Commerce Department said last week that demand for durable goods slid 2.2 percent last month after rising 3.3 percent in April and 2 percent in March.