Bringing Down the Riviera: Images of the Implosion

A shot by shot look at the implosion that reduced a Vegas landmark to rubble. 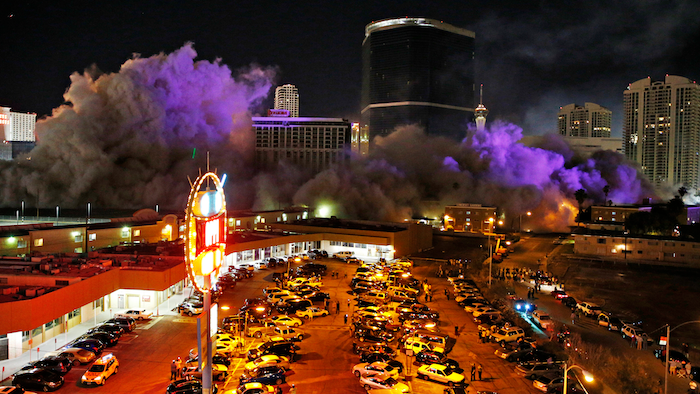 LAS VEGAS (AP) — The Riviera Hotel and Casino — the Las Vegas Strip's first high-rise that was as famous for its ties to organized crime as its Hollywood personification of Sin City's mobster past — exited the scene early Tuesday with a cinematic implosion, complete with fireworks.

A series of explosions demolished the 24-story Monaco Tower around 2:30 a.m., with the building crumbling from the sides and then into the middle, kicking up a mountain of dust. A fireworks display erupted moments before the demolition.

"The Riv" closed in May 2015 after 60 years on the northern end of the Strip. The shuttered casino's owners, the Las Vegas Convention and Visitors Authority, spent $42 million to level the 13-building property.

Officials said the Monte Carlo Tower will be imploded in August. The tourism agency bought the 2,075-room property that spans 26 acres last year for $182.5 million, plus $8.5 million in related transaction costs, with plans to expand its Las Vegas Convention Center.

Images chronicling the implosion can be viewed in the gallery above.