When Nestle approached Cascade Locks, OR with a plan to build a water bottling plant from a local spring, town leaders jumped at it. But opposition from residents, tribes and orchard owners have landed the project on Oregon's May 17th primary ballot. 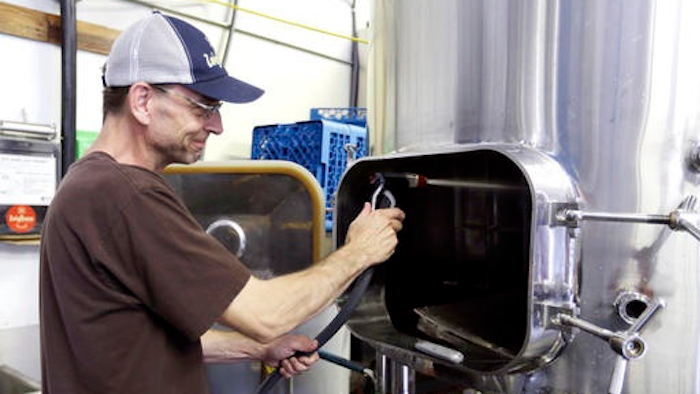 Thunder Island Brewery head brewer Brian Perkey hoses out a vat as he talks about Nestle moving a water bottling plant into the small community in Cascade Locks, Ore. The proposal for Nestle to build a water bottling plant in Cascade Locks is set to be one of the most heated battles in the state’s May 17 primary. Town leaders and some residents want it, but others are fiercely opposed.
AP Photo/Don Ryan

CASCADE LOCKS, Oregon (AP) — This little town, set below steep, forested mountainsides at the bottom of the Columbia River Gorge, stubbornly persists, eight decades after a dam was built downstream, drowning the navigational locks that gave the place its name and main income.

Today, unemployment in Cascade Locks is 19 percent, four times the rate of the rest of Oregon. Many businesses have gone the way of the Scenic Winds Motel, whose cabins are crumbling, the roofs greening with moss, a no trespassing sign posted underneath towering firs.

So when Nestle, the Swiss transnational company, approached with a plan to build a water bottling plant from a local spring — plus a promise of 50 jobs and annual revenues of hundreds of thousands of dollars — town leaders jumped at it. So did many of the 1,200 residents.

But the opposition — including residents, Native American tribes and orchard owners — has grown so fierce that the project landed on Oregon's May 17 primary ballot. It's now one of the primary's most heated battles.

Measure 14-55 asks the voters of surrounding Hood River County to ban the commercial production and transport of bottled water.

The campaign has pitted neighbor against neighbor and demonstrates Cascade Locks' bigger dilemma of generating income without spoiling the jaw-dropping scenery that makes the place special.

Blue signs opposing the project and red ones in favor are staked in lawns and affixed to fences all over town.

"Right now, we have two groups of people fighting tooth and nail over it. I've lost friends over it, just because I put up a sign saying no to the measure," said Heather Greene, a bronze sculptor whose large-than-life statue of Sacagawea adorns a city park. She wants Nestle there.

Farm and orchard owners have noted Hood River County experienced drought in 2015. Water bottlers would compete with their orchards and farms for the growing population of the town of Hood River and its shrinking water supply, they said.

But rainfall isn't consistent across the county.

Cascade Locks has water to spare, said city manager Gordon Zimmerman. The town gets an average of 77 inches of rain a year. That's about 2.5 times more than Hood River, the county seat , located about 20 miles east on Interstate 84.

Nestle's plan to use 118 million gallons of water per year — which probably wouldn't happen before 2020 if its allowed — would require some juggling.

The company would pay Cascade Locks an undetermined amount for the water. But the town must first swap well water for spring water with the Oregon Department of Fish and Wildlife. The state, which uses the spring-fed Little Herman Creek for its Oxbow Hatchery, has already agreed to trade.

Hatchery manager Erin AnDyke noted that the crystal-clear spring water is pathogen free and is gravity-fed into the hatchery, while the city water will be from a well and must be pumped uphill. Pumps can break down, he noted.

"We're dealing with a live product down there," AnDyke said. "You go to bed thinking, 'Are they going to be all right?'"

The city would then sell its new share of spring water to Nestle for its Arrowhead bottled water, branded as sourced from mountain springs.

In drought conditions, Nestle, which would be entitled to 0.5 cubic feet per second of spring water, could be using half of the flow, though it could be only one-tenth after wetter months, AnDyke said.

Studies by the fish and wildlife department and one commissioned by Nestle say the hatchery won't be adversely affected, and that conditions will be virtually unchanged for wild salmon swimming in the Columbia that use Herman Creek Cove to cool off during hot weather.

Many folks aren't buying it.

They also object to trucks making 200 trips a day to and from the plant, which would be in a business park and not next to the springs. Oregon was the first state to enact a bottle bill, in 1971, to encourage recycling. Many here reject contributing to plastic waste.

In April, Orvie Danzuka, a leader of the Confederated Tribes of Warm Springs, appeared before the Cascade Locks City Council and cited global warming, salmon die-offs and water conservation as reasons to reject the bottling plant.

"I was told by my elders that if you start selling your resources, then they'll go away," he said amid the pounding of drums and chants and ululations from tribal members.

Nestle — also facing a battle in drought-hit southern California over its long-standing use of spring water in San Bernardino National Forest — says it's being unfairly singled out by Measure 14-55. The proposal would "limit our ability to pursue good jobs in a clean industry for Cascade Locks," the company says.

Thunder Island Brewery sits right along the Columbia, near where the Bridge of the Gods — part of the Pacific Crest Trail — links Oregon to Washington. Head brewer Brian Perkey said the brewery uses municipal water and pays for it.

But for Perkey, the main issue is not water.

Greene, the sculptor who supports the Nestle plan, attributes a lot of the opposition to stigma and people being suspicious of large corporations.

But she believes the town needs help.

"Cascade Locks is dying," she said.