Lost since 1946, the Imperial Japanese Navy mega-submarine was intentionally sunk by U.S. forces after its capture. 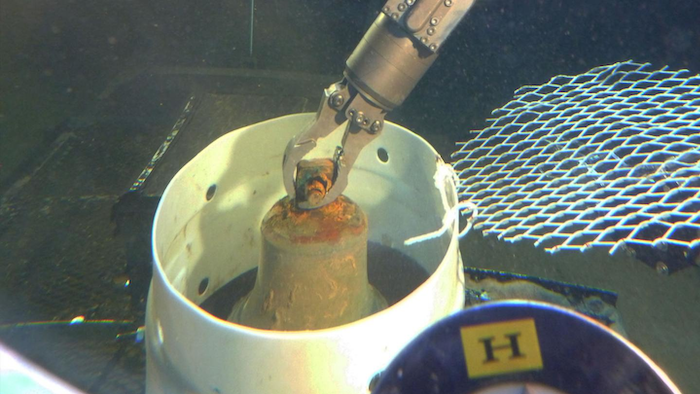 The manipulator arm of HURL's submersible places the I-400 bell into a collection basket.
Hawai'i Undersea Research Laboratory, University of Hawai'i

During a test dive last week, the Hawai'i Undersea Research Laboratory (HURL) recovered the bronze bell from the I-400 - a World War II-era Imperial Japanese Navy mega-submarine, lost since 1946 when it was intentionally sunk by U.S. forces after its capture.

Longer than a football field at 400 feet, the I-400 was known as a "Sen-Toku" class submarine --the largest submarine ever built until the introduction of nuclear-powered subs in the 1960s. The I-400 is now protected under the Sunken Military Craft Act and managed by the Department of the Navy.

The recovery was led by veteran undersea explorer Terry Kerby, HURL operations director and chief submarine pilot. Kerby was joined by Scott Reed, Chris Kelley, and Max Cremer (all with HURL) on the dive. The team used both of HURL's human-occupied submersibles, Pisces IV and Pisces V. Teamwork between the two subs was instrumental in recovering the bell.

Since 1992, HURL has used its submersibles to search for historic wreck sites and other submerged cultural resources as part of the National Oceanic and Atmospheric Administration's (NOAA) maritime heritage research effort. Heritage properties like historic wreck sites are non-renewable resources possessing unique information about the past.

This recovery effort was possible because of a collaboration between the University of Hawai'i School of Ocean and Earth Science and Technology, California State University-Chico (CSU-C), Naval History and Heritage Command and the USS Bowfin Submarine Museum.

"It was an exciting day for the submersible operations crews of Pisces IV and Pisces V. Just prior to our test dive, Dr. Georgia Fox [archaeologist at CSU-C] had received the underwater archaeological research permit from the Naval History and Heritage Command. We had only one chance to relocate and recover the bell," said Kerby.

At the end of WWII, the U.S. Navy captured five Japanese subs, including the I-400, and brought them to Pearl Harbor for inspection. When the Soviet Union demanded access to the submarines in 1946 under the terms of the treaty that ended the war, the U.S. Navy sank the subs off the coast of O'ahu. The goal was to keep their advanced technology out of Soviet hands during the opening chapters of the Cold War. HURL has successfully located four of these five lost submarines and now recovered a piece of that history.

"These historic properties in the Hawaiian Islands recall the events and innovations of World War II, a period which greatly affected both Japan and the United States and re-shaped the Pacific region," said Dr. Hans Van Tilburg, maritime heritage coordinator for NOAA in the Pacific Islands region. "Wreck sites like the I-400 are reminders of a different time, and markers of our progress from animosity to reconciliation."

Fox developed a conservation treatment plan for the bell. Following a year-long stabilization process, the bronze bell will be on display at the USS Bowfin Submarine Museum, where it will join binoculars and other artifacts from the I-400.

"The recovery of the bronze bell from the I-400, and its eventual display at the USS Bowfin Submarine Museum gives us a chance to share this history with more than three hundred thousand annual visitors, many from the Pacific Region. What was once an artifact on the seafloor will now be a national historic maritime treasure for all to see," said Jerry Hofwolt, executive director of the USS Bowfin Submarine Museum.

Robot Could Use Catheter to Treat Stroke Patients Remotely