When the JASSM missile project began, Pike County Operations had to determine the best method to move missiles out of the production area and into a testing chamber. 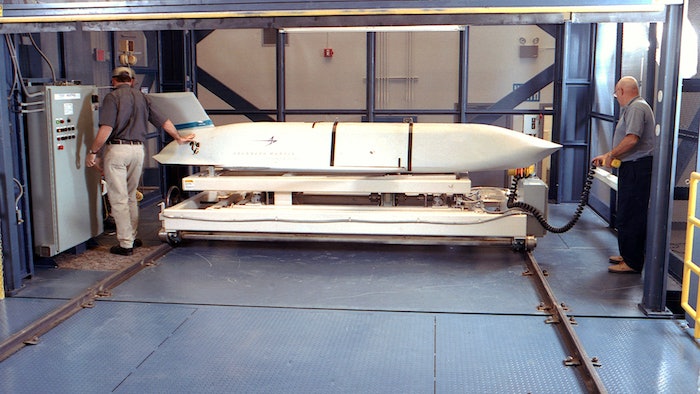 When the JASSM missile project began, Pike County Operations had to determine the best method to move missiles out of the production area and into a testing chamber.

The plan was to move the missiles horizontally into the chamber with an overhead crane. Then, the missile would be placed on a lift that would move it vertically to a designated testing station. This initial concept, however, proved to be too costly and inefficient. The team at Lockheed Martin then began to design a more cost-effective and practical solution that was also safer.

Working with PFlow engineers, Lockheed Martin developed a new concept to move the missiles. Safety was a primary design objective, given the sensitive nature of the product that was being transported. A specialized platform was designed to move a missile horizontally into the chamber and then vertically to the designated test station. The final concept required approximately four months to develop.

Lockheed Martin requirements meant that the system had to be stable, safe and capable of accurately positioning the missile for critical testing procedures. In addition, the platform had to accommodate repetitive points of loading and unloading with fractions of an inch variation. Vertical and horizontal control tolerances were critical.

To transport the missile, PFlow designed a 6,500 pound-capacity work platform that travels laterally on 18-inch wheels via a gear-and-pinion line shaft drive. The platform measures approximately 20 feet by 20 feet and weighs more than 28,000 lbs. The platform travels on a rail system, recessed into the floor. It meets OSHA and Lockheed Martin safety standards associated with handling explosive devices, as well as for personnel safety while riding the platform.

When a missile comes out of production, it is placed on the work platform. The platform then moves horizontally on the recessed rails into the test chamber. Once inside the chamber, the platform and missile are raised vertically 20 feet to a designated testing station. Vertical travel of the platform is controlled via screw lifts mounted inside the platform columns. All services, including power, communications and data, are provided by retractable reels. After missile testing is completed, the platform is lowered and backed out of the chamber. Horizontal and vertical positioning of the platform is accurate to within one-eighth inch.