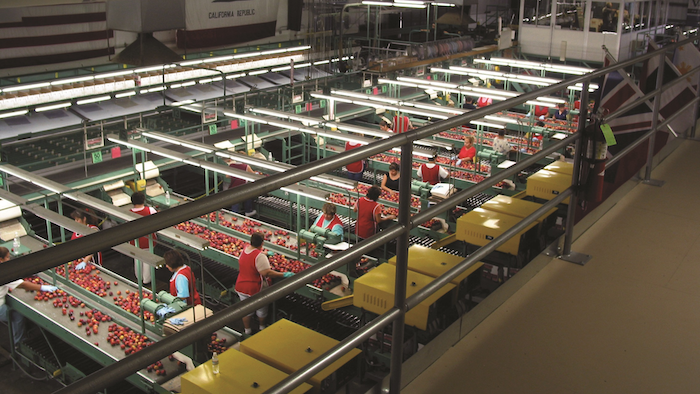 The company’s newly built lunchroom mezzanine above the fruit packing floor required gentle and even airflow, and—due to its proximity to the inherently dusty process of packaging kiwi and other fruit—it needed to be easily cleanable. Additionally, any ductwork option Chapman recommended needed the ability to incorporate custom printed logos to satisfy Exeter, California-based Venida’s passion for displaying company branding.

“There were company logos throughout the plant,” recalled Chapman, president of Jack’s Refrigeration in Reedley, Calif. “The practical side of the application—airflow, air distribution, aesthetics—all pointed toward fabric ducts, but the fact that company logos could be custom printed on the duct surface helped convince Venida that fabric ducts were a superior choice over metal ducts.”

“We wanted an attractive, cool area where employees could have lunch and our domestic or international visitors could relax in comfort,” said Richard Donkin, manager of Venida, which is a custom packer of peaches, plums, nectarines, kiwifruit, pomegranates, persimmons and grapes. “The fabric duct looks very streamlined and high tech, which is good because it’s very visible as guests look beyond it and out over the operation from the mezzanine.”

An even airflow was a major consideration because the space’s seven-foot-high headroom, support columns and ceiling structure required ductwork to be mounted outside the 4,600-square-foot mezzanine and blow cool air into it.

With such a long throw of 30 feet, traditional metal ductwork with registers at 10-foot intervals would have created uncomfortable drafts on occupants. Chapman’s initial thought of installing four evaporative coolers on the roof and letting air drop into the space was viable, but would have been a drafty proposition.

Instead, Chapman specified TufTex premium fabric ductwork with a high-throw airflow from DuctSox, Dubuque, Iowa. The streamlined ductwork has linear diffusion in the form of DuctSox’s high-throw orifices running the entire length of the mezzanine, which produces a more even airflow than registers mounted every 10 feet on metal ducts. Chapman’s design also allowed the use of one large 22,500 cfm evaporative cooler versus splitting up the equipment requirement in four units, which saved Venida significant installation costs.

Existing exhaust fans luckily had variable frequency drives which afforded Chapman the opportunity to adjust the exhaust and produce a preferred positive pressure.

“Evaporative cooler output static is rated for scenarios of simply dumping air into a space and no external static,” explained Chapman. “Since we designed for a .5 wg static pressure because of the ductwork, the cooler is actually producing around 17,500 cfm.”

The fast-track project’s schedule was squeezed between a two-week off-season period for the fruit packer. The fabric duct and suspension system was installed in less than one day, according to Chapman.

The plant plans to periodically disassemble and launder the white ductwork with their in-house maintenance staff to maintain indoor air quality as well as aesthetics.

“Metal ductwork is immovable, but all we need is a forklift/manlift cage to take the fabric duct down for cleaning,” said Donkin. Whether for a new building or retrofitting an existing space, fabric air dispersion systems, like DuctSox, just make more sense than metal ductwork.”