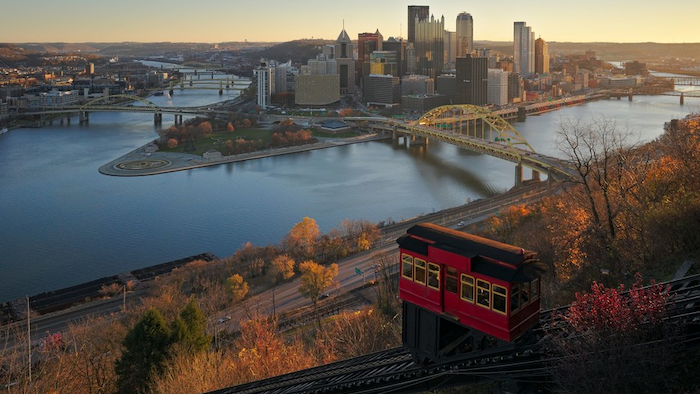 Pittsburgh, between its industrial past and a clean, green tech-driven future.
Dllu, CC BY-SA

President Donald Trump’s mention of Pittsburgh in his announcement withdrawing the U.S. from the Paris Agreement on climate evoked the city’s past as an industrial powerhouse.

The president’s words seem fitting for an administration taking great pains to symbolically and literally roll back the achievements of its predecessor.

In 2009, the Obama administration chose Pittsburgh as the site for the U.S.-hosted summit of the G-20, a group of governments and central bankers from 20 major world economies. The meeting was in a downtown facility that was the world’s first and largest Leadership in Energy and Environmental Design (LEED) certified convention center. Positive media coverage poured in from around the world, showcasing Pittsburgh’s “green economy” rebirth as a center of clean technology and innovation.

The city took a hard hit in the 1980s when corporate and government policies, global economic forces and new technologies resulted in southwestern Pennsylvania’s permanent loss of more than 150,000 manufacturing jobs and 176,000 residents.

In the decades since, Pittsburgh has used its considerable economic, institutional and political resources to reinvent itself as a center of education, innovation and health care. From 2010 to 2015, worker productivity shot up 10 percent, average annual wages increased 9 percent and the overall standard of living rose 13 percent in the region.

But the former Steel City’s success has proven to be uneven across racial and class lines. The recovery has also proven difficult to replicate in the former mill towns and outlying rural mining areas that once provided the raw materials upon which its fortunes were made. In my book, “Beyond Rust: Metropolitan Pittsburgh and the Fate of Industrial America,” I take readers on two tours of the region that shed light on the divided responses to Trump’s opposition to the global climate accord.

On the first tour in my book, we view the history of Pittsburgh through a lens similar to that used by longtime city mayor Richard Caliguiri, who served from 1977 to 1988. For him, for development officials, and for many of the residents employed outside traditional industries, Rust Belt imagery rooted in the dirty, blue-collar mill towns was a barrier to recruiting talent and attracting new businesses.

Caliguiri envisioned the city resurrected as a “service and retailing center, a center for health care, a city of transplants, a city of High Technology, a city of Robotics, of computer programming.” Supported by both public and private funds, the business-backed Allegheny Conference on Community Development, elected officials and leaders of Carnegie Mellon University and the University of Pittsburgh set the stage for the “eds and meds” economy for which the city is known today.

The tour in my book takes readers through suburban research campuses, office buildings and residential areas that would not be out of place in other prosperous parts of the nation. Entering the city proper, triumphant symbols of economic and environmental transformation are everywhere; among the examples are Summerset at Frick Park, a new urbanist residential area erected on top of a reclaimed slag pile, and the Pittsburgh Technology Center, built by a public-private consortium on the former site of an enormous riverfront mill. The Hot Metal Bridge, which once carried molten iron across the Monongahela River, now gives students and workers a healthy and eco-friendly route to walk or bike from the university center of Oakland to the hip neighborhoods of the city’s South Side.

If the tour was limited to these neighborhoods, the Pittsburgh revitalization might seem an unqualified success.

Forty miles upstream, however, my book’s second tour heads to the deindustrialized communities of Charleroi, Monessen and Donora. The population is dwindling, and those who remain continue to struggle with high poverty and unemployment rates. Gravel and rock piles and a loading dock on the Monongahela’s western bank share the panorama with the hulking mass of the Speers Railroad Bridge. While a little rusty, this span still carries the Wheeling and Lake Erie Railway as it transports freight to and from five different mills and those employees fortunate enough to still work in them.

Many residents came to value the Steel City’s improving rivers, cleaner skies and scenic woodlands. And yet, in 1985, AFL-CIO President Lane Kirkland announced, “Pittsburgh looks beautiful. But I’d like to see it a little dirtier, a little more smoke. The most environmentally offensive thing I see is the shut-down mills.”

From this perspective, the post-industrial reinvention of the region offered only low-paid service work or the hazy idea of job retraining. What good were pretty views and playgrounds for white-collar workers without a solution to the loss of unionized, family-wage blue-collar jobs?

As a result, for many people in the region, the real excitement over the past few years has bubbled up from the new “blue” jobs in oil and gas extraction. The invention of hydraulic fracturing, or “fracking,” unlocked massive natural gas reserves in the region’s Marcellus and Utica shale formations.

The number of active wells in southwestern Pennsylvania quadrupled from 2008 to 2012. The fracking boom prompted a renaissance of reindustrialization with opportunities for jobs in the energy, chemical and metals sectors. But, a fracking downturn beginning in 2015 caused economic anxieties to rush back to the surface. Many locals worried that their financial recovery was threatened by global economic forces beyond their control or, more sinisterly, environmental activists accused of favoring polar bears above people.

As president, Obama made multiple trips to the city of Pittsburgh, touting its economic reinvention – including that G-20 conference in 2009. But neither he nor Hillary Clinton’s presidential campaign ever found their way to these old bastions of the Democratic Party. Trump did. In June 2016, he arrived in Monessen to acknowledge the “very, very tough times” and assure residents he would “make it better fast.”

For those left out of the promise of a post-industrial Pittsburgh reborn through environmental stewardship and a high-tech economy, Trump’s simplistic but powerful message of reindustrialization, economic protectionism and environmental deregulation often resonates with their own lives and dreams for the future. That may even have helped him win Westmoreland County, just east of Pittsburgh. But it remains unclear how the president’s decision to withdraw from the Paris Agreement will actually serve to make their lives materially better. At the least, it reminds those of us who have navigated the winds of economic change successfully of the consequences for ignoring the needs of those struggling to find a safe harbor.

This article was originally published on The Conversation. Read the original article here: http://theconversation.com/pittsburgh-a-city-of-two-post-industrial-tales-78877.