Record profits after a 1,300% year-over-year increase.

Evergreen Marine, the Taiwanese company who chartered the Ever Given during its infamous blocking of the Suez Canal last year, has dished out massive bonuses following record profits.

According to a report on Business Insider, the company rewarded employees by delivering year-end checks equal to more than 3 times some employee’s annual salaries – reaching upwards of $180,000.

The bonuses come after Evergreen saw profits of over $5.7 billion through the first three quarters of 2021 – which is a 1,300% year-over-year increase.

The Ever Given was freed after six days, but remained in the canal for several months following financial disputes amongst the Suez Canal Authority and the Ever Given's owner, Shoei Kisen Kaisha.

The stuck ship reportedly cost over $5 billion a day in delayed trade and caused nearly $1.3 billion in damage to the canal.

Shoei Kisen Kaisha is now suing Evergreen to share in the liabilities of the incident. 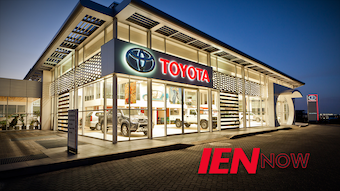 General Motors had held the top spot for 90 years.
Jan 7th, 2022
Follow Us
Most Recent