The project posed numerous challenges — not least due to the scale of the original. 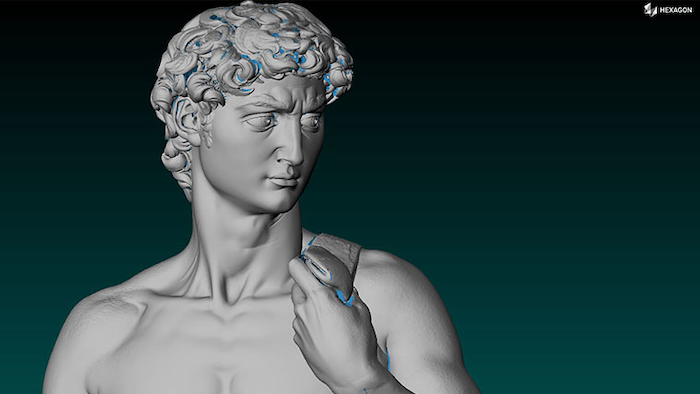 A 3D printed replica of Michelangelo’s famous David sculpture, re-produced with the use of scanning technology by Hexagon, was unveiled this week during a ceremony at the Italy Pavilion at Expo 2020 Dubai.

The project to create the replica posed numerous challenges, not least due to the scale of the original, which stands at over seven meters tall and weighs more than five tons. Scanning this iconic sculpture took two people 10 days to complete. Two Hexagon technologies, an AICON StereoScan neo structured light scanner and a Leica Absolute Tracker with handheld scanner, were used to ensure optimum accuracy while managing the scale of the challenge. The mix of these two technologies was critical to achieve the best result; the laser tracker, which is typically used to measure precision aerospace components, is able to give high accuracy across large areas and the structured light scanner is able to achieve even higher resolution when focused on small areas. This instrument was used for the particularly detailed elements of the sculpture such as the face and hands. By combining these technologies, the team was able to achieve the optimum compromise of scale and resolution.

Nevertheless, there were a number of additional challenges to overcome. For example, an 80cm distance was required between the scanner and the statue to achieve optimum detail. This was particularly tricky when trying to capture intricate parts. Additionally, given the height of the David the scanners had to be mounted on a stair and raised, after which the team would analyze the picture to check for resolutions and accuracy, and repeat if necessary.

Following David’s appearance at the Expo, the digital twin created by the scanning process will be analyzed to derive additional learnings. The extraordinary detail of the data reveals, for example, the effects of acid rain, dust, and even traces of the different tools used to create it. This information can be used by experts and restorers to preserve the David, and other iconic art pieces, by anticipating and preventing degradation.

It’s also recognized that there may be opportunities for future, more accurate scans of the David and other iconic art pieces. This latest project follows a similar one completed by Stanford University in 1999, which took one month and 22 people to achieve a lower resolution scan. As technology advances it’s hoped that an even higher level of detail can be achieved.

“Scanning the David presented a number of challenges,” says Cesare Cassani, Automation Technologies & Portable Systems Manager, Hexagon’s Manufacturing Intelligence division. “Not only was the scale enormous, but the time constraints were also tight, and we had to overcome a number of obstacles as we went along. Specific parts such as the inside of the hands, and underneath the bent arm, for example, proved particularly challenging, as well as capturing all the dents and imperfections that the David has incurred over the years.”

“The opportunity of being part of the team who has worked at this project is not only a high recognition of Hexagon’s technology and expertise in digital transformation, it is also for us a matter of pride in contributing to the scientific research and to the disclosure of culture and art throughout the world” says Levio Valetti, Marketing and Communications Manager, Hexagon Commercial Operations Italy.

The re-production of Michelangelo’s David is a project jointly promoted by the Italian General Commissioner’s Office for Expo 2020 Dubai, the Galleria dell’Accademia Museum of Florence and the Ministry of Culture in partnership with the Department of Civil and Environmental Engineering at the University of Florence.