Maxon will supply the drive systems of the autonomous ANYmal inspection robot. 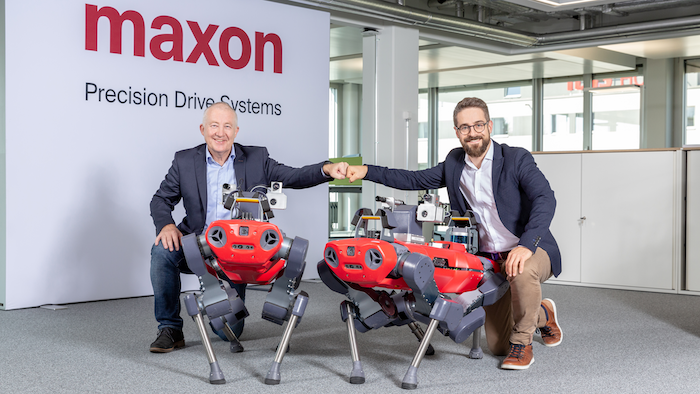 Drive specialist maxon, renowned for its Mars motors, is joining forces with the robotics startup ANYbotics and will in future supply the drive systems of the autonomous ANYmal inspection robot. The robot will soon be marketed in large quantities. This cooperation will also benefit maxon, since ANYbotics provides important robotics know-how and is currently the most successful young company in this field.

A solid partnership: maxon and ANYbotics are entering into a close, long-term collaboration and are thus strengthening Switzerland as a prime location for robotics. One of the decisions made by the two partners is that maxon, as global drive specialist, will handle the future development and production of the actuators for ANYmal. ANYmal is an autonomous, four-legged robot that is capable of inspecting and monitoring industrial systems and is destined to also take on dangerous maintenance tasks in the future. The robot can even cope with difficult infrastructures such as stairs and inclines, and is used in a wide variety of industries.

The maxon Group contributes 60 years of experience in drive technology to the partnership, as well as a global production infrastructure and validated processes, and will help to advance the industrialization and commercialization of ANYmal – with competitive, high-performance drive systems, twelve of which are used in each robot.

“In maxon, we have found the ideal partner for taking care of our drive technology as we transition from small series to mass production. With maxon’s expertise and infrastructure, we will be able to further optimize a core element of our robots and access state-of-the-art production methods,” says Péter Fankhauser, CEO of ANYbotics.

ANYbotics recently won the Swiss Economic Award 2020 and has been chosen as the best young entrepreneur in Switzerland in the Hightech/Biotech category. The company has valuable experience in robotics – a market that offers great potential for maxon.

Eugen Elmiger, CEO maxon Group, says: “By collaborating with ANYbotics, we are merging know-how from different worlds. The creativity and high responsiveness of a startup are paired with the global and stable industrial environment of the maxon Group. Together we will create an energy-efficient and intelligent robotic drive, the likes of which has never been seen before.”

To further cement the partnership, the two companies are also getting closer geographically: maxon, which has its headquarters in the canton of Obwalden, is opening a lab at the Züri.ch Campus in the Oerlikon district of Zurich, in close proximity to ANYbotics. Here the engineers and technicians will meet to discuss the progress on their projects. Additionally, maxon wants to use the lab to get even closer to ETH Zurich and the University of Zurich, offer technical support to young engineers, provide workspaces, and get talent on board.

Eugen Elmiger says: “We are already heavily involved with vocational education in and around Zurich and Lucerne. With the new lab, we will be in an even better position to support talents in drive technology and robotics.”

The Swiss specialist for quality drives
maxon is a developer and manufacturer of brushed and brushless DC motors, as well as gearheads, encoders, controllers, and entire mechatronic systems. maxon drives are used wherever the requirements are particularly high: in NASA's Mars rovers, in surgical power tools, in humanoid robots, and in precision industrial applications, for example. To maintain its leadership in this demanding market, the company invests a considerable share of its annual revenue in research and development. Worldwide, maxon has more than 3000 employees at nine production sites and is represented by sales companies in more than 30 countries.

ANYbotics: Mobile robots for industrial applications
ANYbotics AG is a young company that develops autonomous robots that independently inspect and monitor industrial systems. ANYbotics was born in 2016 as spin-off from ETH Zurich. It was founded with the purpose of commercializing the technology behind the four-legged ANYmal robot. Today, ANYbotics is one of the world’s leading developers of mobile robotics for complex industrial environments. A staff of 50 develops and markets the technology for use in the energy, process and construction sectors.

Chucking System Has No Air Tubes or Hoses