The current system uses delegates to select the union's leadership. 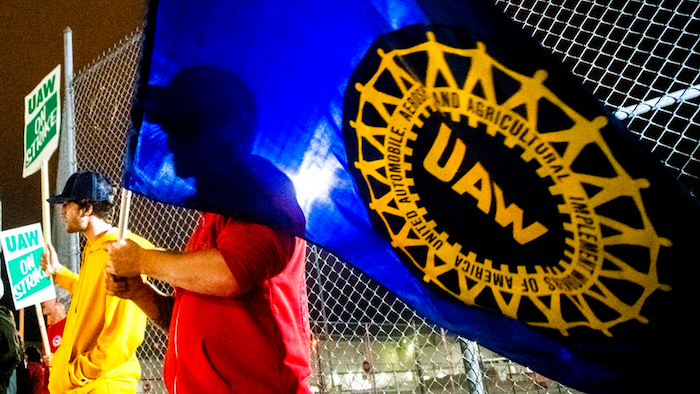 A General Motors employee who works on the line, waves a United Auto Workers flag as employees leave the Flint Assembly Plant at midnight as part of the national strike on, Sept. 16, 2019, in Flint, Mich. Members of the United Auto Workers union appear to be in favor of picking their leaders in direct elections. A federal court-appointed monitor who is conducting the election said on his website Wednesday, Dec. 1, 2021, that 65,136 ballots were cast in favor of direct elections, while 38,503 wanted delegate voting. The results are unofficial and the full count likely won't be done until Thursday, the website said.
Jake May/The Flint Journal via AP, File

DETROIT (AP) — Members of the United Auto Workers union appear to be in favor of picking their leaders in direct elections.

With 72% of the ballots counted, nearly 63% favor direct elections, while about 37% want to keep the current system of delegates selecting the union's leadership.

A federal court-appointed monitor who is conducting the election said on his website Wednesday that 65,136 ballots were cast in favor of direct elections, while 38,503 wanted delegate voting. The results are unofficial and the full count likely won't be done until Thursday, the website said.

Just over 143,000 ballots were received by Monday's mail-in deadline, according to union monitor Neil Barofsky.

Election results must be approved by the Labor Department and a federal judge before they are official.

Barofsky was appointed by a federal judge earlier this year as part of a settlement that avoided a government takeover of the 397,000-member union after a wide-ranging corruption scandal. The vote on direct election of leaders also was part of the settlement.

Currently, union leaders are chosen every four years at a convention, with the delegates picked by local union offices. But the new slate of leaders is picked by the outgoing president, and seldom is there serious opposition.

If members approve direct elections, then a vote on leadership will take place before June of next year.

The vote and monitor are part of a December deal between former UAW President Rory Gamble and ex-U.S. Attorney Matthew Schneider in Detroit that held off moves by the government to take over the union.

Schneider viewed direct elections as a way to hold union leaders accountable for their actions.

But Gamble, who retired June 30, said in an interview at the time direct elections would let anti-union groups to put out disinformation. Plus, he said the delegate system gives minorities, women and members outside of the automobile sector a voice in picking leaders.

Gamble, who was replaced by Ray Curry, was not charged in the federal probe. He has said the union is now clean and will have safeguards in place to prevent the scandal from happening again.

Eleven union officials and a late official’s spouse have pleaded guilty in the corruption probe since 2017, including the two presidents who served before Gamble, Gary Jones and Dennis Williams. Both were sentenced to prison.

Not all of the convictions were linked. The first wave, which included some Fiat Chrysler employees, involved money paid as bribes from a Fiat Chrysler-UAW training center in Detroit. Jones and Williams were caught in an embezzlement scheme with the leaders taking thousands of dollars of union money to buy golf clubs, booze, lavish meals and to rent expensive villas in Palm Springs, California.

During the probe, Schneider, who led the investigation, said the corruption was so deep that the federal government may take over the union.

The U.S. Attorney’s office said it uncovered embezzlement of over $1.5 million in dues money, kickbacks to union officials from vendors, and $3.5 million in illegal payments from executives at Fiat Chrysler who wanted to corruptly influence contract talks.

Barofsky, who will stay in place for six years unless both sides agree to a shorter term, leads the law firm Jenner & Block’s monitorship practice.