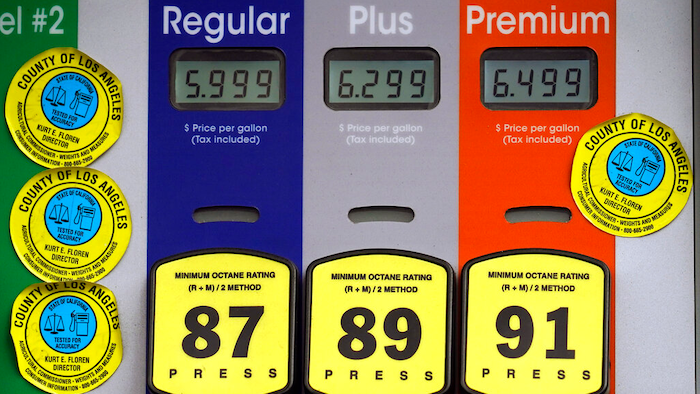 WASHINGTON (AP) — A worsening surge of inflation for such bedrock necessities as food, rent, autos and heating oil is setting Americans up for a financially difficult Thanksgiving and holiday shopping season.

Inflation is eroding the strong gains in wages and salaries that have flowed to America's workers in recent months, creating a political threat to the Biden administration and congressional Democrats and intensifying pressure on the Federal Reserve as it considers how fast to withdraw its efforts to boost the economy.

Fueling the spike in prices has been robust consumer demand, which has run into persistent supply shortages from COVID-related factory shutdowns in China, Vietnam and other overseas manufacturers. America's employers, facing worker shortages, have also been handing out sizable pay raises, and many of them have raised prices to offset those higher labor costs.

The jump in inflation is hardly confined to the U.S. Prices have been accelerating in Europe and elsewhere, too, with annual inflation in the 19 countries that use the euro currency exceeding 4% in October, the most in 13 years, and energy prices spiking 23%. In Brazil, inflation soared more than 10% in the 12 months through October, according to data released this week. Higher prices for electricity, cooking gas, meat and other staples have plunged many Brazilians further into financial instability.

Americans are now spending 15% more on goods than before the pandemic. Ports, trucking companies and railroads can't keep up, and the resulting bottlenecks are swelling prices. Surging inflation has broadened beyond pandemic-disrupted industries into the many services that Americans spend money on, notably for restaurant meals, rental apartments and medical services, which jumped 0.5% in October.

The accelerating price increases have fallen disproportionately on lower-earning households, which spend a significant portion of their incomes on food, rent, and gas. Food banks are struggling to assist the needy, with beef, egg and peanut butter prices jumping. Millions of households that are planning year-end travel, Thanksgiving dinners and holiday gift-giving will be forced to pay much more this year.

At the same, the economy is managing to sustain its recovery from the pandemic recession, and consumers, on average, have plenty of money to spend. That is in contrast to the “stagflation” of the 1970s, when households endured the double hardship of high unemployment and high inflation.

Many Americans are also receiving healthy pay raises, especially workers at restaurants, hotels and entertainment venues, where hourly wages are up more than 10% from a year ago. And families, on average, have built up substantial savings from stimulus checks and enhanced unemployment benefits.

“We're still looking at an economy in a strong position,” said Sarah House, a senior economist at Wells Fargo. “The consumer is still going out and spending, which is why we are seeing the price gains we’re seeing.”

Used car prices jumped last month after having eased in August and September. The cost of a used vehicle has rocketed more than 25% from a year ago. With automakers sharply slowing production because of parts shortages, prices for new cars have risen for seven straight months. Furniture is more expensive. Grocery prices have climbed 5.4% in the past year, with the price of beef roasts leaping 25%. Bacon is up 20% from a year ago.

The Biden administration has attributed higher meat prices to consolidation in the meat-packing industry, with lack of competition enabling big processors like Tyson's to raise prices. Meat-packing companies have countered that COVID-related shutdowns of plants, and the difficulty in finding workers to staff the factories when they reopened, are the culprit.

Many Republicans in Congress have blamed President Joe Biden's $1.9 trillion financial aid package, approved in March, for intensifying inflation. The additional stimulus checks and enhanced unemployment aid, they argue, drove demand beyond what the economy could produce.

On Wednesday, Biden visited the port of Baltimore to highlight parts of the recently passed infrastructure package that will upgrade capacity at ports and, the administration says, help unclog bottlenecks and ultimately reduce inflation.

“Inflation hurts Americans pocketbooks, and reversing this trend is a top priority for me," the Biden said.

Energy costs soared 4.8% just from September to October, with gasoline, natural gas and heating oil surging for the same reason that many other commodities have grown more expensive: Demand has risen as Americans drive and fly more, but supplies haven’t kept up. A gallon of gas, on average, was $3.42 nationwide Tuesday, according to AAA, up from just $2.11 a year ago. The Energy Information Administration has forecast that Americans will spend 30% more this winter on natural gas and 43% more on heating oil.

Job gains and pay raises have been much larger during the pandemic recovery than they were after the Great Recession roughly a decade ago. But in contrast to the years that followed that downturn, when inflation was low, rising prices are diminishing Americans' confidence in the economy, surveys have found.

Economists still expect inflation to slow once supply bottlenecks are cleared and Americans shift more of their consumption back to pre-pandemic norms. Consumers should then spend more on travel, entertainment and other services and less on goods such as cars, furniture, and appliances. This would reduce pressure on supply chains.

But no one knows how long that might take. Higher inflation has persisted much longer than most economists had expected.

“The inflation overshoot will likely get worse before it gets better,” said Goldman Sachs economists in a research note Sunday.

For months, Fed Chair Jerome Powell had described inflation as “transitory,” a short-term phenomenon linked to labor and supply shortages resulting from the speed with which the economy rebounded from the pandemic recession. But last week, Powell acknowledged that higher prices could last well into next summer.

The Fed chair also announced that the central bank will start reducing the monthly bond purchases it began last year as an emergency measure to boost the economy. In September, Fed officials also forecast that they would raise its benchmark interest rate from its record-low level near zero by the end of 2022 — much earlier than they had predicted a few months ago. Sharply higher inflation might accelerate that timetable; investors expect at least two Fed rate hikes next year.

Many large companies are passing on the cost of higher pay to their customers, and in some cases, consumers are paying up rather than cutting back.

Fast food prices soared 7.1% in October from a year earlier, the government said Wednesday. That was the largest such increase on record, reflecting higher costs for beef and other foods as well as rapidly rising labor costs.

McDonald’s boosted hourly pay 10% to 15% over the past year and is paying more for food and paper. The company said last month that it raised prices 6% in the July-September quarter from a year earlier. Yet company sales leapt 14% as virus restrictions eased.