The effort at the New York warehouse is the second unionizing attempt in the past year at Amazon. 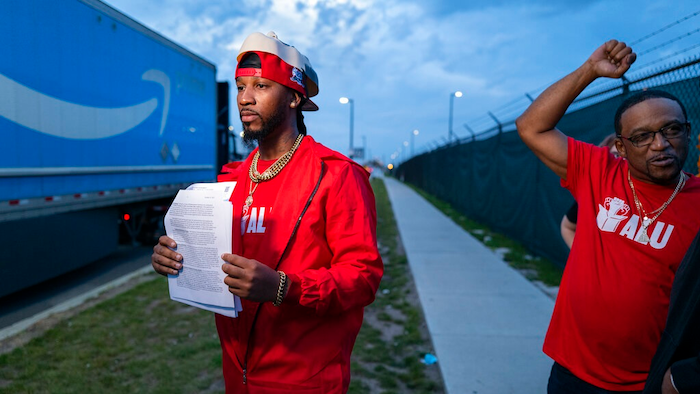 Chris Smalls, president of the Amazon Labor Union, joins supporters at the Amazon distribution center in the Staten Island borough of New York, Monday, Oct. 25, 2021, as he holds "Authorization of Representation" forms that were earlier delivered to the National Labor Relations Board in New York. Union organizers have delivered more than 2,000 signatures to federal labor officials in a bid to unionize workers at Amazon's Staten Island distribution center.
AP Photo/Craig Ruttle

NEW YORK (AP) — The National Labor Relations Board said there was sufficient interest to form a union at an Amazon distribution center in New York, after union organizers on Monday delivered hundreds of signatures to the agency — a key step in authorizing a vote that could establish the first union at the nation's largest online retailer.

This is the second unionizing attempt in the past year at Amazon. Workers in Alabama resoundingly defeated an effort earlier this year, but organizers there are asking federal officials for a do-over.

Organizers delivered more than 2,000 signed union-support cards to the NLRB's Brooklyn office after launching the effort in April. The specific number of signatures was not immediately available.

“This is a small victory," said Christian Smalls, a former employee of the retail giant who now leads the fledgling Amazon Labor Union, adding, “We know the fight has just started.”

As part of its petition to hold a union vote, organizers must have submitted signatures from at least 30% from the roughly 5,500 employees who the union says work at four adjoining Amazon facilities that it seeks to represent under collective bargaining.

Monday’s development puts the company on notice that the NLRB has determined that union organizers have met the minimum threshold for Amazon to formally acknowledge and to respond to the union-organizing petition. That means the company must post notices on its premises that the union is seeking to become the bargaining representative for thousands of Amazon workers on Staten Island.

The company could have several avenues to challenge the effort, including contesting the number of employees that union organizers used to calculate the minimum signatures they needed.

“We’re skeptical that a sufficient number of legitimate employee signatures has been secured to warrant an election," Amazon's spokesperson, Kelly Nantel, said in a statement.

“If there is an election, we want the voice of our employees to be heard and look forward to it. Our focus remains on listening directly to our employees and continuously improving on their behalf,” Nantel said.

While a vote is not yet certain, organizers hailed the formal filing of their petition as an important step to forming a union.

“This was the easy part," Smalls said of the signature gathering. “Convincing at least 50% of the workers to vote yes is the hard part.”

Smalls says he was fired last year after organizing a walkout to protest working conditions, although Amazon said he repeatedly violated company policies.

NLRB staff members started counting the cards soon after they were delivered, and union organizers were confident that they had met the minimum necessary. They had planned a rally outside the Staten Island distribution center Monday evening.

Following the count, the NLRB ordered Amazon to provide a roster of employees who would be covered by the proposed union and set November 15 as the start of hearings on the union-organizing petition.

If an election is held, the NLRB said it will conduct voting by secret ballot. Smalls proposed that the election be held on March 30, the day he was fired.

If organizers in New York succeed, it could launch other union drives across the company’s vast empire, which includes more than 100 fulfillment centers and nearly 1 million employees across the United States.

Amazon employees have complained about long work hours, insufficient breaks and safety, with Smalls and others likening working conditions to modern-day sweatshops. The employee turnover rate has also been a cause of concern.

The union efforts on Staten Island come as Amazon is on a hiring binge. It announced in September it wants to hire 125,000 delivery and warehouse workers and is paying new recruits an average of $18 an hour in a tight job market. That’s in addition to the 150,000 seasonal workers it plans to bring on for the holidays.

The Retail, Wholesale and Department Store Union had led the effort to form a union at the Alabama facility that was defeated in April.

A hearing officer for the NLRB found in August that Amazon potentially interfered with the Alabama election. And the RWDSU is now waiting for a decision from an NLRB regional director to see whether the hearing officer’s guidance will be sanctioned. But even with a second election, labor experts say a union victory there is a long shot.

The New York City organizing drive is taking place without the support of a national union.