The $900 million package is part of a sweeping plan with Ford for a vehicle and battery plant near Memphis. 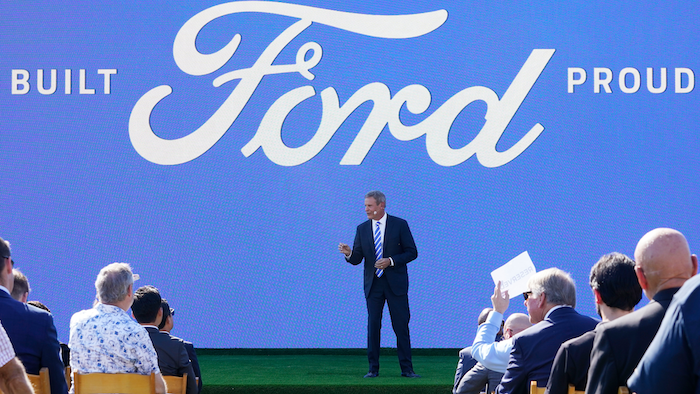 NASHVILLE, Tenn. (AP) — Tennessee lawmakers on Wednesday committed to spending nearly $900 million on state incentives, infrastructure upgrades and more as part of a sweeping plan with Ford Motor Co. to build an electric vehicle and battery plant near Memphis.

It took the Republican-led General Assembly just three days to sign off on the economic package after Gov. Bill Lee called them back to the Capitol for a special legislative session that was supposed to focus solely on the Ford deal.

“It's exciting to think what it might mean for the next generation of Tennesseans, particularly those in rural West Tennessee,” Lee told reporters shortly after the General Assembly advanced the incentive package. “There are a few days that feel as significant and as important as today.”

Despite the governor's directive, some Republicans attempted to jam a number of measures that would undermine protective measures against the COVID-19 outbreak. Those attempts were ultimately unsuccessful after Senate leaders announced the bills would not receive a hearing. The push won't be dead for long, though, because Republicans mustered enough support to bring the legislature back in Nashville next week to consider a slew of changes in opposition to COVID-19 requirements.

About 10 lawmakers voted against or abstained from voting on the Ford bills.

Ford and South Korean battery maker SK Innovation announced last month that they would spend $5.6 billion to build a factory to produce electric F-Series pickups. The project, located near the small town of Stanton in rural Haywood County, is expected to create about 5,800 new jobs at the West Tennessee megasite by 2025.

When the Ford deal was initially announced, Lee said Tennessee offered $500 million in incentives to help secure the 3,600-acre (1,457-hectare) project. That dollar amount jumped drastically this week when Lee's administration unveiled plans to spend hundreds of millions more on improving the megasite.

Around $138 million has been budgeted for infrastructure and demolition work at the site, including the $52 million announced by the governor this summer before the Ford project was announced. Another $40 million has been proposed to build a new technical college in Haywood County. Another $200 million would be spent on road projects.

The massive investment in the Western Tennessee site sparked praise among Democratic lawmakers who noted the area containing the state's largest Black population had been long ignored by Tennessee's leaders.

“We need to think about the union jobs that will be created in rural Tennessee to lift people out of poverty," said House Minority Leader Karen Camper, a Democrat from Memphis. "This was great, this was the first step in where we want to go...we look forward to the thriving economy that's going to come as a result of (Ford) coming here."

Republican lawmakers pointed out that Ford's commitment was further evidence of Tennessee's business friendly policies. Along with Ford, gun manufacturer Smith & Wesson said it would move its headquarters to Tennessee after company officials said legislative proposals in their current Massachusetts would prohibit them from manufacturing certain weapons.

“If you compare their northern cities to our southern cities...if you compare all these great companies like Ford Motor Co. and Smith and Wesson coming down South, I think I can tell my grandson the war between the states is still going on and we’re winning,” said Republican Sen. Frank Niceley.

Yet even with Republican support, some GOP members raised concern that Ford's employees will eventually vote for union membership. Multiple lawmakers unsuccessfully attempted to insert language that would force any offer to join the United Auto Workers union by secret ballot.

Currently, Ford’s national contract with the UAW pledges that the company will remain neutral when the union tries to organize any new factories. It will agree to “card check” sign-up efforts, which let unions recruit workers to sign cards saying they want to be represented. Once 51% of workers sign on, the plant becomes union.

Before landing the Ford project, Tennessee had invested more than $174 million in the megasite but struggled to lure the big tenant it wanted. Haywood County, meanwhile, saw its population shrink by 4.9% to 17,864 people from 2010 to 2020, one of 14 counties to lose population as Tennessee grew as a whole by 8.9%, according to census data.

Lawmakers also signed off on a new authority to oversee the megasite, which officials say still has another 500 empty acres to market to companies.

What records will be made public or kept secret from the new organization has drawn some scrutiny. For instance, the agency would have the power to keep confidential for five years any “sensitive” documents whose release would interfere with the group’s mission.

Tennessee Coalition for Open Government Executive Director Deborah Fisher said the exemption is overly broad. Members of Lee's administration said the policy mirrors what his Department of Economic and Community Development can already do under state law.