A screen-printing approach to foldable circuits could make many devices easier and cheaper to produce. 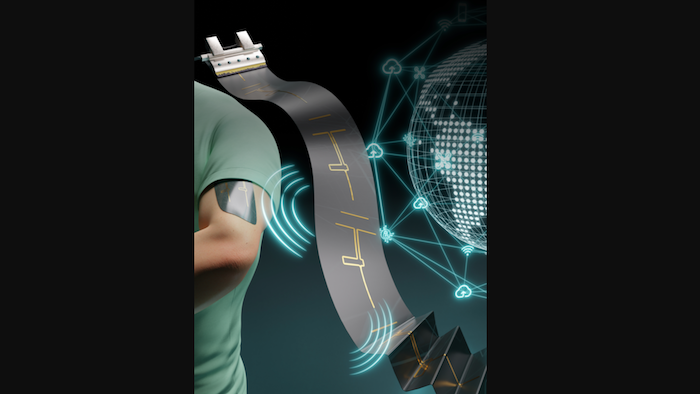 A method that combines screen-printable composite and metallic inks could make foldable electronics easier and cheaper to manufacture at industrial scales. These devices, developed at KAUST, can be mounted on various supports, including nonplanar surfaces, and could enable many Internet of Things applications.

Next-generation technology such as automotive radars for self-driving cars, smart buildings and wearable sensors will depend more heavily on the high-frequency millimeter-wave band, including 5G. To date, large-scale manufacturing approaches to make foldable electronics have focused on developing metallic inks and printing conductive patterns and have overlooked dielectric substrates.

There have been a range of barriers to the use of substrates such as paper and some polymer films in foldable electronics. These substrates involve fabrication processes that are too constraining and complex for mass production and cannot produce multilayered or ultrathin flexible devices. They also have a dielectric loss that exceeds the requirements for millimeter-wave devices.

Atif Shamim and coworkers have now devised a composite ink composed of ceramic particles dispersed in the polymer acrylonitrile-butadiene-styrene (ABS). They used this new ink to generate extremely flexible, large-area dielectric substrates with tunable lateral dimensions, thickness and permittivity. They screen-printed the ink on to glass and, after drying, simply peeled off the substrates from the support. The substrates presented a minimum thickness of a few microns that could be increased through successive printing passes. They also exhibited a low dielectric loss at 28 gigahertz, which is suitable for 5G antennas.

The researchers screen-printed a silver nanowire-based ink on the dielectric substrates to build conductive patterns. The patterned films maintained high and stable electrical performance when rolled or folded into half — a result of the polymer binder present in the ink. Furthermore, they retained their performance when incorporated into a four-layer circuit consisting of alternating metal-patterned and dielectric layers. This suggests that the screen-printable inks can be used in multilayer structures, such as multilayer printed circuit boards and automotive radars.

For proof of concept, the researchers screen-printed a flexible quasi-Yagi antenna on a dielectric substrate to show that the device performed well in the millimeter-wave band when bent or folded. “Our approach will be beneficial for novel 5G antennas and accelerate the implementation of 5G,” says postdoc Weiwei Li.

The team is now exploring potential applications of their approach to other electronic devices. Li says that both inks are compatible with roll-to-roll processing, which can help meet the high demand for wearable sensors at low costs. “We expect fabrication costs to be extremely low, to the extent that the devices will become disposable,” Shamim says.