Widespread friction in supply chains sent a closely watched index of German business optimism lower for the third month in a row. 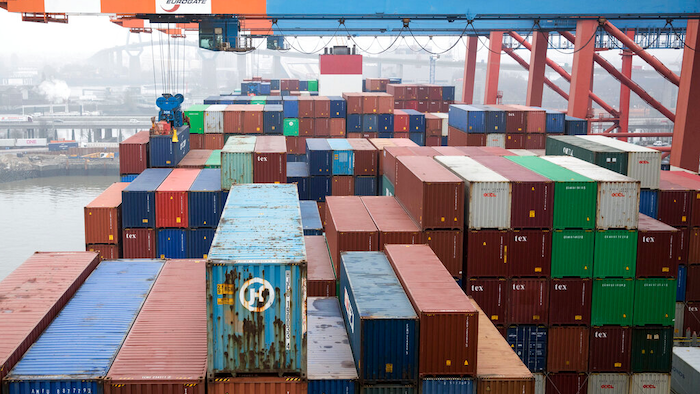 In this March 22, 2019 photo, containers are unloaded by a freighter at the Eurokai terminal (Eurogate) in the port of Hamburg, Germany.
Christian Charisius/dpa via AP

FRANKFURT, Germany (AP) — Shortages of semiconductor chips and other raw materials are continuing to hit Germany's manufacturers, as bottlenecks leave companies struggling to fill orders from a rebounding global economy.

Widespread friction in supply chains sent a closely watched index of German business optimism lower for the third month in a row in September. The Ifo institute index fell to 98.8 points from 99.6 in August.

“The problems with obtaining raw materials and intermediate goods is holding back the German economy,” the Munich-based institute said Friday. “Industry is experiencing a bottleneck recession.”

The German economy, Europe's largest, has rebounded sharply from the depths of the pandemic shutdowns in the first part of 2020 with gross domestic product in the second quarter marking a 9.4% increase over the same quarter last year.

But major manufacturers such as auto firms Daimler, BMW and Volkswagen have all experienced trouble getting the semiconductor chips they need for today's cars stuffed with electronic features such as advanced driver assistance. Other materials needed by businesses, including steel, construction materials and plastics, are also in short supply.

Truck maker Traton Group, which is majority owned by Volkswagen, said this week that sales in the third quarter would be “significantly lower than planned” as the company had to resort to steps such as pulling control units out of unsold vehicles and installing them in vehicles that were on order.

Traton cited rising COVID-19 cases in Malaysia and the lockdown that followed as a factor. Malaysia is an important hub since several chip companies that supply the auto industry have production there, the truck maker said.

The manufacturing troubles are a reversal of fortune as services businesses reported improved outlooks as restrictions on movement and activity are eased amid higher levels of vaccination. Earlier in the pandemic, services took the biggest hit from the pandemic as restaurants and tourist businesses saw drastic reductions in customer traffic or were ordered to close.

Michael Tran at Capital Economics said that the Ifo report was “further evidence that Germany's recovery is losing steam.” That said, he foresaw strong overall GDP growth of around 3% in the current, third quarter over the second quarter, reflecting primarily the low level of activity at the start of the second quarter.