Tesla Hopes to Start Production at Berlin Factory in October

Legal challenges and problems getting official permits have delayed the project. 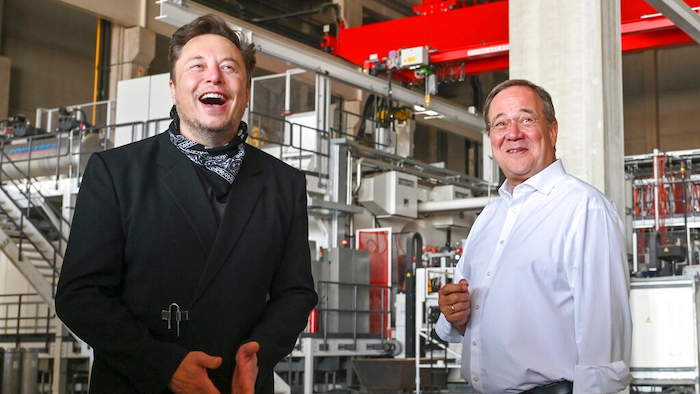 Germany's center-right candidate to replace Angela Merkel as chancellor in the upcoming elections and Christian Democratic Union chairman, Armin Laschet, right, talks to Elon Musk, Tesla CEO, during a visit at the construction side of the Tesla Gigafactory in Gruenheide near Berlin, Germany, Friday, Aug. 13, 2021. Laschest visits the factory as part of his election campaign for the upcoming national elections on Sept. 26, 2021.
Patrick Pleul/dpa via AP

BERLIN (AP) — Tesla founder and chief executive Elon Musk said Friday that he hopes to start producing cars at its new factory outside Berlin in October.

The U.S. company had originally planned to begin manufacturing its electric cars at the Gigafactory in Gruenheide, east of the German capital, in July.

But legal challenges and problems getting official permits have delayed the project.

"We’re looking forward to hopefully getting the approval to make the first cars, maybe in October if we’re fortunate,” Musk said during a visit to the site Friday.

Armin Laschet, the center-right Union bloc's candidate to succeed Angela Merkel as chancellor in next month's election, thanked Musk for his investment in Germany.

Laschet suggested German laws should be changed to make it harder for people not directly affected by the factory's construction to file legal complaints against it, German news agency dpa report.