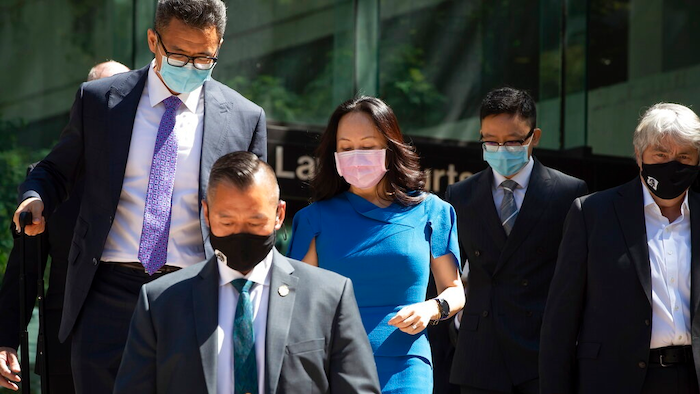 VANCOUVER, British Columbia (AP) — Lawyers for a senior Huawei executive argued in a Canadian court Wednesday that the United States “strategically crafted” a misleading record of the fraud case against her and acted “in bad faith” when presenting reasons she should be extradited.

Huawei Technologies Chief Financial Officer Meng Wanzhou, who is the daughter of the company’s founder, was arrested at Vancouver’s airport in 2018 at the request of the U.S., which has charged her with fraud. Her arrest infuriated Beijing, which sees her case as a political move designed to prevent China’s rise.

The U.S. accuses the Chinese communications giant of using a Hong Kong shell company called Skycom to sell equipment to Iran in violation of U.S. sanctions. It says Meng committed fraud by misleading HSBC bank about the company’s business dealings in Iran.

The only remedy for the court is to deny the extradition request, Duckett said.

Meng attended the hearing and followed the proceedings through a translator.

Over the next three weeks, Association Chief Justice Heather Holmes will hear final arguments on whether Meng should be extradited to face trial in the United States.

Holmes likely won’t make her ruling until later in the year. Whatever her decision, it will likely be appealed.

In past hearings, Meng’s lawyers have argued her extraction should be halted because Canadian Border Security Agency officers detained and questioned her without a lawyer, asked questions that benefited U.S. authorities, seized her electronic devices and put them in special bags to prevent wiping, and compelled her to give up the passcodes before her official arrest.

They have also argued that comments by then-President Donald Trump showed he hoped to use Meng’s arrest as part of a bargaining chip in trade negotiations with China.

Soon after Meng’s arrest, China arrested Canadians Michael Spavor and Michael Kovrig in apparent retaliation and charged them with spying. Both have remained in custody with limited access to Canadian consular officials.

Canadian consular officials had online visits with Kovrig on July 29 and Spavor on Tuesday, the Canadian Foreign Ministry said.

It said officials “continue to provide consular services" to the men and their families but Canadian law prevented the release of further information.

“The Canadian government remains deeply concerned by the arbitrary detention by Chinese authorities of these two Canadians since December 2018 and continues to call for their immediate release," the ministry said in an emailed statement.

Meng remains free on bail in Vancouver and is living in a mansion.