PG&E Says Equipment May Be Tied to Latest Fire

The revelation came as the utility detailed plans to use intentional power shutoffs to try to prevent more fires. 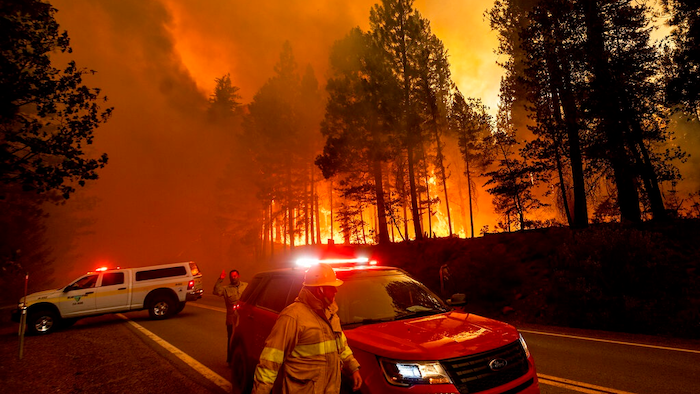 SAN FRANCISCO (AP) — Pacific Gas & Electric said its equipment may have been involved in starting a small wildfire that merged with a massive blaze now threatening homes in the Northern California mountains, a revelation that came Tuesday as the nation's largest utility briefed state regulators on plans to use intentional power shutoffs to try to prevent more fires.

The U.S. Forest Service was examining a tree found on PG&E power lines where the Fly Fire began July 22, according to the utility's report to the California Public Utilities Commission. The smaller blaze later joined with the much larger Dixie Fire, which PG&E also said may have started when a tree fell on one of its power lines. It's burning near the town of Paradise, which largely was destroyed in a 2018 wildfire that became the nation's deadliest in a century and was blamed on PG&E equipment.

Regulators and officials with the California Department of Forestry and Fire Protection and the Governor’s Office of Emergency Services said Tuesday that the San Francisco-based utility has improved its handling of blackouts since October 2019, when it was widely criticized for botching several intentional outages, including one that left nearly 2 million people in Northern California without power for days.

But commission President Marybel Batjer emphasized Tuesday that turning off power must be a last resort. If and when the utility calls for an outage, she said, company officials must ensure it's short and customers are prepared to withstand it.

“This is just the minimum of what must be done," she said.

The discussion comes as California is mired in a damaging wildfire season exacerbated by a historic drought gripping the U.S. West, with climate change making the region hotter and drier and blazes bigger and more destructive. Much of Northern California is expected to see dangerous wildfire conditions later this week — low humidity, strong winds and high temperatures — that could trigger what's called a “public safety power shutoff."

Officials with PG&E, San Diego Gas & Electric and Southern California Edison testified about improvements in weather forecasting that they say should make blackouts more targeted in size and duration as well as their plans to better communicate with customers and local officials.

“We’re leveraging the best available science, and we’ll bring to bear the best minds, the best analytics, to be able to help give us the appropriate predictive capacity and capability,” said Sumeet Singh, PG&E senior vice president and chief risk officer.

Will Abrams, a victim of a 2017 wildfire in Santa Rosa caused by PG&E equipment who has been repeatedly forced to evacuate, asked commissioners to remember survivors.

“We’re in a very difficult situation right now with each fire really preventing us from rebuilding our homes and our lives,” he said.

PG&E equipment has been blamed for sparking some of the state’s deadliest wildfires in recent years, most notably in 2017 and 2018 when a series of blazes burned down more than 28,000 buildings and killed more than 100 people. It emerged from bankruptcy last year after wildfires ignited by its long-neglected electrical grid prompted it to declare financial insolvency.

The Dixie Fire, California’s largest blaze, covered nearly 400 square miles (1,025 square kilometers) in mountains where 67 homes and other buildings have been destroyed. New evacuation orders have been issued as strong winds whipped up the flames. The fire was 35% contained.

It was burning northeast of the town of Paradise, where survivors of a 2018 fire that was started by PG&E equipment and killed 85 people watched warily. The utility pleaded guilty last year to involuntary manslaughter in 84 of the deaths.

Last month, PG&E announced plans to bury 10,000 miles (16,000 kilometers) of its power lines to try to prevent its electric grid from sparking wildfires. On Tuesday, officials said crews were strengthening poles and lines, installing sectional devices to limit the number of customers affected and providing portable batteries to eligible households.

The utility would be “tenacious in our efforts to stop ignitions from our equipment,” PG&E Corp. CEO Patti Poppe said in a statement Monday. She is the company’s fifth leader in less than three years.