See the details of the new two-year contract that the union voted in agreement for Saturday. 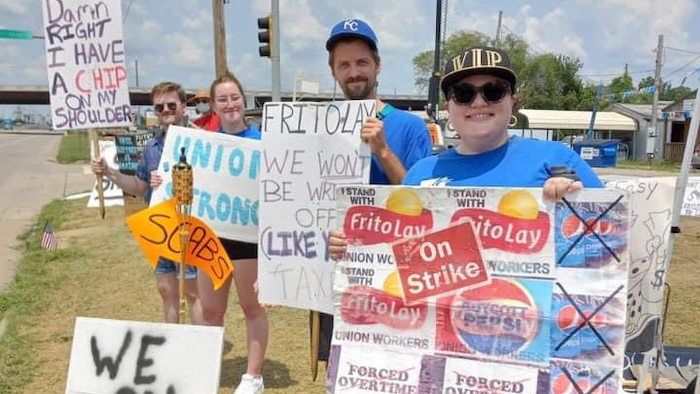 The Bakery, Confectionery, Tobacco Workers and Grain Millers International Union (BCTGM) and Frito-Lay reached an agreement Saturday, July 24 that resolves the union's strike by Local 218 members at a Frito-Lay facility in Topeka, KS after 20 days.

Below are statements given by both sides Saturday:

"We are pleased the BCTGM Local 218 members from Frito-Lay’s Topeka site ratified the revised contract offer and we look forward to welcoming all of our employees back to work next week. At all times we have negotiated in good faith with union representatives to address the most pressing concerns raised regarding hours of work and overtime. While Frito-Lay believed its fully recommended July 1 offer addressed those concerns appropriately, the new offer from Frito-Lay provides a guaranteed day off during each work week, eliminates “squeeze shifts,” creates additional opportunities for the union to have input into staffing and overtime and offers 4% wage increases to employees in all job classifications over the two-year contract.

For more than 85 years, Frito-Lay has provided well-paying jobs and benefits to thousands of Americans and made countless contributions to the communities where our teams work and live. Today, we are proud to employ more than 66,000 people and are committed to providing a safe and fair workplace for everyone.  We believe our approach to resolving this strike demonstrates how we listen to our employees, and when concerns are raised, they are taken seriously and addressed. Looking ahead, we look forward to continuing to build on what we have accomplished together based on mutual trust and respect."

"BCTGM Local 218 members employed at Frito Lay in Topeka, Kansas have shown the world that union working people can stand up against the largest food companies in the world and claim victory for themselves, their families and their communities. More than 600 BCTGM members hit the streets in a fight for a better quality of life and to have a voice over how many hours in a week they can be forced to work.

This fight resonated across country and around the world and the out-pouring of support for our brave union members in Topeka was overwhelming. Labor unions, community allies, politicians, concerned citizens and the religious community all played a part in this historic victory.

I also want to express our gratitude to the International Union of Food and Allied Workers (IUF) for rallying food union members around the world in support of this strike.

The outcome of this strike was a testament to the tenacity and grit of the Frito Lay workers in Topeka. I could not be more proud of our Local 218 membership, the union negotiating committee, and Midwest International Vice President Brad Schmidt and International Representative Jason Davis.

While this victory will go down in the history books of the BCTGM, similar fights are happening across North America where union workers are standing up to employers and demanding respect on the job and a legitimate say over their working conditions.

The BCTGM International will always stand with our union brothers and sisters in support of their fight for dignity, justice and respect on the job."