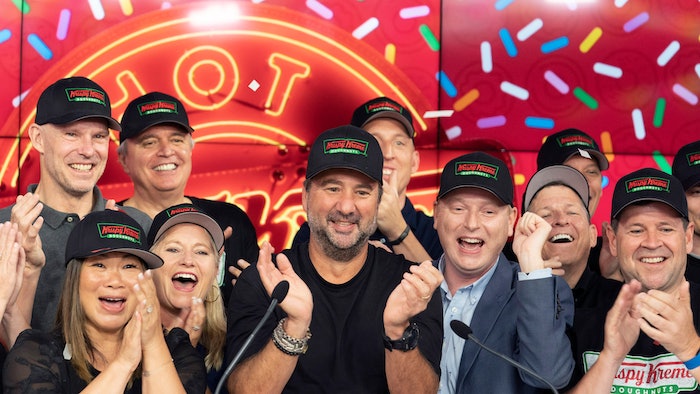 Doughnut chain Krispy Kreme opened lower in its debut on the Nasdaq Thursday, getting off to a bit of a lackluster start.

The Charlotte, North Carolina-based company, known for its glazed doughnuts, priced its initial public offering of 29.4 million shares at $17 a piece. That's well below the $21 to $24 it was seeking. It raised $500 million and plans to use proceeds to pay down debt.

The tepid reaction may mean that the market is unsure if a business that sells doughnuts and coffee is the right pick during a time when people have become increasingly more health conscious.

Krispy Kreme operates in 30 countries. In the quarter ended April 4, revenue jumped 23% to $321.8 million while the net loss narrowed to less than $1 million, from $10.9 million in the same period a year earlier.

The underwriters of the offering have a 30-day option to buy up to an additional 4.4 million shares at the IPO price, less underwriting discounts and commissions.

Krispy Kreme announced in May that it was going to go public for a second time. After initially going public in 2000, the company was purchased in a $1.35 billion deal by JAB Holding in 2016 and taken private.

The shares trade under the “DNUT" ticker symbol. The offering is expected to close on Tuesday.