These innovations can help cut emissions. 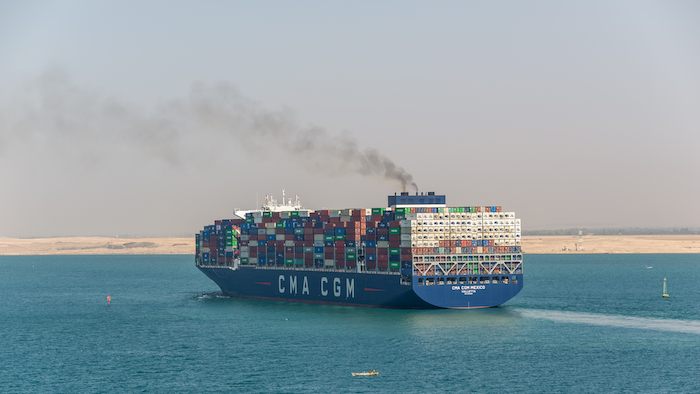 Ships carry more than 80% of world trade, and they rely heavily on some of the least environmentally friendly transportation fuels available.

There are no cheap, widely available solutions that can lower the shipping industry’s planet-warming carbon emissions – in fact, shipping is considered one of the hardest industries on the planet to decarbonize – but some exciting innovations are being tested right now.

As a professor of naval architecture and marine engineering, I work on ship propulsion and control systems, including electrification, batteries and fuel cells. Let’s take a look at what’s possible and some of the fuels and technologies that are likely to define the industry’s future.

Shipping is the cheapest way to move raw materials and bulk goods. That has given it both an enormous economic impact and a large carbon footprint.

The industry emits roughly 1 billion metric tons of carbon dioxide per year – nearly 3% of global emissions, according to the International Maritime Organization, a specialized U.N. agency made up of 174 member nations that sets standards for the industry. If shipping were a country, it would rank between Japan and Germany as the sixth-largest contributor to global carbon dioxide emissions. Moreover, nearly 70% of ships’ emissions occur within 250 miles (400 kilometers) of land, meaning it also has an impact on air quality, especially for port cities.

Technological innovation, in addition to policies, will be crucial for achieving low-carbon or zero-emission shipping. Academic research institutes, government labs and companies are now experimenting with electrification; zero- or low-carbon fuels such as hydrogen, natural gas, ammonia and biofuels; and alternative power sources such as fuel cells and solar, wind and wave power. Each has its pros and cons.

Just as on land, electrification is one key to cleaning up the industry’s emissions. It allows engines operating on fossil fuels to be either replaced by alternative power generation technologies, or downsized and modified for low-emissions operation. It also allows ships to connect to electric power while in port, reducing their emissions from idling.

Ship electrification and hybridization are significant trends for both commercial and military vessels. Electrifying a ship means replacing its traditional mechanical systems with electrical ones. Some fleets have already electrified propulsion and cargo handling. Hybrid power systems, on the other hand, integrate different power-generation mechanisms, such as engines and batteries, to leverage their complementary characteristics.

I see deeper electrification and broader hybridization as a core strategy for achieving green shipping.

Tremendous opportunities also exist for improving the operation of the existing fleet – and reducing fuel use – through automation and real-time control. Advanced sensors, artificial intelligence and machine learning can help ships to “see,” “think,” and “act” better to improve efficiency and reduce emissions.

Shifting to cleaner and greener fuel sources will be essential for decarbonizing the shipping industry.

Most of the power plants on today’s ships are based on internal combustion engines that use cheap heavy fuel oil. Innovations in marine diesel and gas turbine engine design and treatment of exhaust gas have lowered harmful emissions. However, most of the “low-hanging fruit” has been harvested, with little room left for dramatic improvement in traditional power sources.

Low or zero-carbon fuels, such as natural gas, ammonia and hydrogen, are predicted to be the dominant energy sources for shipping in the future. Ammonia is easy to transport and store, and it can be used in internal combustion engines and high-temperature fuel cells. But like hydrogen, it is largely still made with fossil fuels. It’s also toxic. Both have the potential to be made with water and renewable energy using electrolysis, but that zero-carbon technology is still in the early stages and costly.

These fuels have started replacing heavy diesel fuels in some marine segments, primarily as demonstration projects and at a slower rate than needed. Cost and infrastructure remain major barriers.

Renewable energy sources, such as wind, solar and wave energy, are also promising. Integrating renewable sources as cost-effective and reliable energy solutions for oceangoing vessels is another challenge developers are working on.

Through electrochemical reactions, fuel cells generate electric power in a highly efficient and clean manner, making them very attractive for transportation. Fuel cells are operated with pure hydrogen or reformed gases, except for high-temperature fuel cells that can use natural gas or ammonia as fuel.

Given the existing fuel infrastructure, most maritime fuel cell demonstration projects today have to store liquid hydrogen or use onboard systems that convert natural gas or other fuel to hydrogen-rich syngas. Infrastructure for hydrogen storage has to be developed for widespread adoption of fuel cell technology.

Battery technology is essential for electrification, even for ships with an internal combustion engine as their prime mover. It also has its own unique challenges. In addition to ensuring the batteries are safe and reliable – you don’t want a fire or power outage in the middle of the ocean – ruggedness and flexibility are necessary for powering operations such as cargo handling and tugboat operations.

Investing in the future

In 2018, the International Maritime Organization’s Marine Environment Protection Committee set targets to reduce the carbon intensity of the global fleet by at least 40% by 2030 and to cut its greenhouse gas emissions in half by 2050 from the 2008 levels.

Those targets are important, but they leave the deadlines for action well into the future. At its June 2021 meeting, the IMO agreed to short-term package to lower ships’ carbon-intensity by 2% a year from 2023 to 2026.

Countries and some shipping companies are recommending a faster transition. In early June, the governments of Denmark, Norway and the United States, along with the Global Maritime Forum and the Mærsk Mc-Kinney Møller Center for Zero Carbon Shipping, announced a new Zero-Emission Shipping Mission to try to scale up and deploy new green maritime solutions faster.

The shipping giant AP Møller-Maersk has said it could support a carbon tax of $150 per ton of carbon dioxide to encourage more innovation and a faster transition, though others in the industry argue that a tax like that would nearly double the cost of bunker fuel and make freight far more expensive, with repercussions throughout the global economy.

I believe the grand vision of zero-emission shipping can be realized if the ship design and fleet operation communities work together with policymakers, the logistics industry and the broad academic and industry technical communities to find solutions.

This is an exciting time to work in the area of energy and power solutions for shipping. The technology developed today will have a transformative impact, not only on the marine industry but also on society.

This article is republished from The Conversation under a Creative Commons license. Read the original article here: https://theconversation.com/shipping-is-tough-on-the-climate-and-hard-to-clean-up-these-innovations-can-help-cut-emissions-162513.