Glass behaves like a solid, but inside, it appears as disorderly as a liquid. 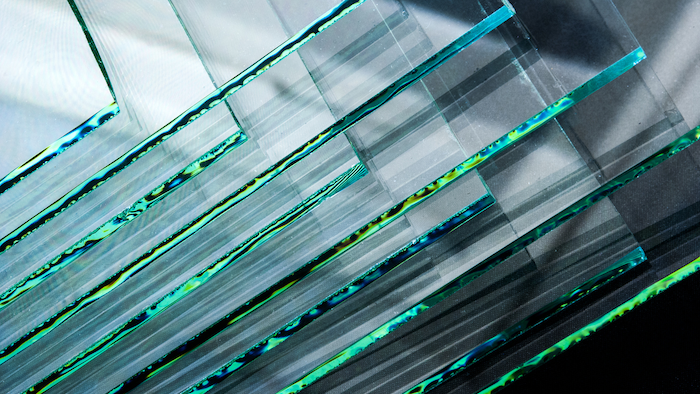 Glass is one of the most common subjects we see every day, but the detailed structure of this non-metallic and non-liquid material has always been a major mystery in science.

A research team co-led by scientists at City University of Hong Kong (CityU) has successfully discovered that the amorphous and crystalline metallic glass have the same structural building blocks. And it is the connectivity between these blocks that distinguishes the crystalline and amorphous states of the material. The findings shed light on the understanding of glass structure.

Glass is a non-crystalline amorphous solid which has widespread practical and technological use in daily life. Besides the soda-lime glass used in windows, there are many other types of glasses like metallic glass. Glass phase material is mysterious and special: on the outside, the material behaves like a solid, but inside, it appears as disorderly as a liquid. So its structure has long been the focus of scientific research.

A research team co-led by Professor Wang Xunli, chair professor of physics and head of the Department of Physics at CityU, has discovered a structure link between a glass solid and its crystalline counterpart, which is a breakthrough in understanding the detailed structure of amorphous material. The work was published in Nature Materials, titled, "A medium-range structure motif linking amorphous and crystalline state."

"The structure of glass has been a grand scientific challenge," said Professor Wang.

Unlike a crystalline solid consisting of periodic stacking (long-range order) of fundamental building blocks known as unit cells, a glass material has no long-range order. But a glass material has ordered structures at short-range (2-5 Å) and medium-range (5-20 Å), and even longer length scales. However, due to the lack of contrast resulting from the amorphous nature of the material, it was difficult for scientists to experimentally determine the nature of medium-range order. As a result, it remained a scientific mystery whether there exists any structural link at medium range or longer length scales between the amorphous material and its crystalline counterparts. Further compounding the issue is that an amorphous material often crystalizes into a phase of different composition, with very different underlying structural building blocks.

To overcome this challenge, the team captured an intermediate crystalline phase through precise control of the heating of a metallic glass (a palladium-nickel-phosphorus (Pd-Ni-P) alloy) at a high temperature.

The team subsequently employed different advanced structure analysis techniques, including high-resolution transmission electron microscopy, high precision synchrotron X-ray diffraction and automated computer image analysis. By comparing the structures of the metallic glass (alloy) in its amorphous and intermediate crystalline states, the team discovered that both forms of the alloys share the same building block, which is a "six-membered tricapped trigonal prism cluster (6M-TTP)" consisting of atoms of palladium, nickel, and phosphorus. The team also concluded that it was the connectivity between the clusters that distinguish the crystalline and amorphous states.

"Our experimental study shows that structural building blocks linking the amorphous and crystalline states, such as the trigonal prism cluster for Pd-Ni-P metallic glass, could well extend to the medium-range length scale, on the order of tens of angstroms (Å), which could be a universal feature for amorphous materials. This finding strongly suggests that the structure of the glass differentiates from its crystalline counterpart mainly in the connectivity of the structural building blocks," said Professor Wang.

The researchers believed that understanding the molecular structure of amorphous material was vital to the design of new materials because the structure determined the properties.

"Our experimental study shed light on the structure of amorphous materials at extended length scales. This will go a long way aiding our efforts to figure out the structure of glass," Professor Wang added.