Some of the fallen containers containing chemicals are believed to have sunk. 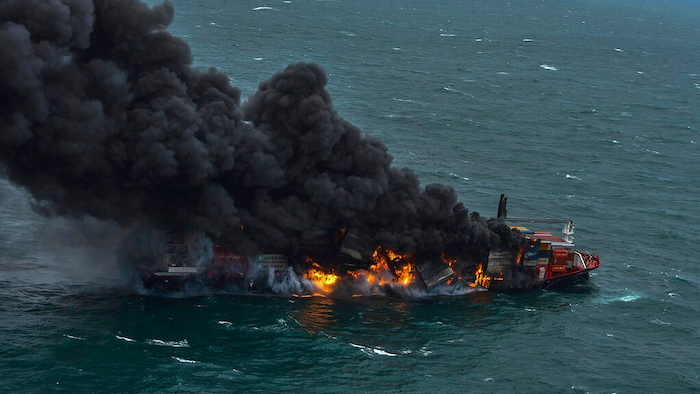 In this photo provided by Sri Lanka Air Force, smoke rises from the container vessel MV X-Press Pearl engulfed in flames off Colombo port, Sri Lanka, Tuesday, May 25, 2021. An explosion occurred Tuesday on a ship anchored off Sri Lanka's capital on which a fire had been burning for several days, prompting the evacuation of all crew members, officials said.
Sri Lanka Air Force via AP

Five tugboats are fighting the fire, aided by a Sri Lankan navy ship anchored nearby. The fire has spread to the quarterdeck where the ship’s bridge is located, navy spokesman Indika de Silva said.

Crewmembers, salvage workers and firefighters evacuated the ship Tuesday after an explosion. Several containers also tumbled into the sea.

The “ship is now poised with a starboard list (leaning to the right) due to the rough seas caused by the prevailing bad weather," the navy said in a statement.

Some of the fallen containers are believed to have sunk, it said, while cautioning fishing boats to avoid the area.

India has deployed three ships, one tugboat and a Dornier aircraft to help firefighting and pollution control on the request of Sri Lankan authorities, the Indian Embassy in Sri Lanka said. The first vessel arrived in the capital Colombo on Tuesday night.

The MV X-Press Pearl was anchored about 9.5 nautical miles (18 kilometers) northwest of Colombo and waiting to enter its port when the fire began six days ago.

The navy believes the fire was caused by chemicals being transported on the Singapore-flagged ship. The ship was carrying 1,486 containers, including 25 tons of nitric acid and other chemicals that were loaded at the port of Hazira, India, on May 15.

X-Press Feeders, which owns and operates the ship, confirmed the crew was safe and said it would work closely with Sri Lankan authorities and emergency services to extinguish the blaze and save the vessel and its cargo.

It said specialized firefighting equipment arrived from Europe and would also join the salvaging operations.