Chicken demand in the US is soaring and Tyson needs workers. 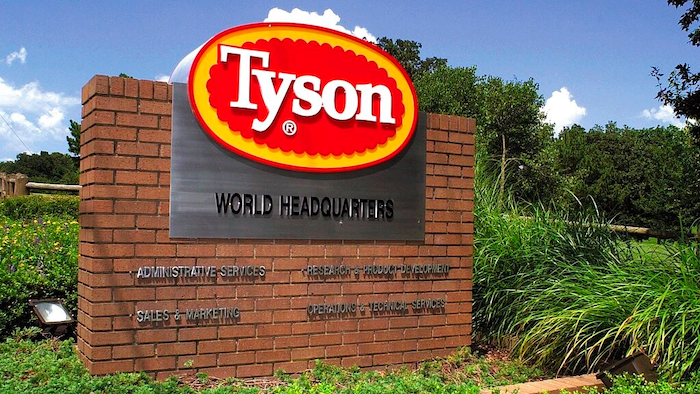 In this July 30, 2001, file photo, a sign marks the entrance to Tyson Foods headquarters in Springdale, Ark. Tyson Foods says it is raising wages to combat absenteeism and worker turnover at its plants as U.S. demand for chicken soars. The Springdale, Arkansas-based company said Monday, May 10, 2021, that absentee rates are around 50% higher than they were before the pandemic.
AP Photo/April L. Brown, File

The Springdale, Arkansas-based company, which processes 20% of U.S. beef, chicken and pork, said Monday that absentee rates are around 50% higher than they were before the pandemic.

Government stimulus payments and enhanced unemployment benefits have made it harder to keep some workers, the company said. Health concerns and child-care issues have also been a factor.

“It takes about six days right now to get five days worth of work done,” said Donnie King, Tyson’s chief operating officer, during a conference call Monday with investors.

To combat the virus, Tyson began vaccinating workers in February through clinics at more than 100 sites. The company said Monday it has vaccinated more than 42,000 employees, or about one-third of its workforce. Tyson said it’s also offering vaccines to team members’ families when possible.

Tyson said it’s raising wages and implementing more flexible scheduling in order to keep its plants staffed. Executives did not elaborate on the percentage pay hikes workers were being given and a company spokesman was unable to provide further details.

“There’s not a magic bullet here. We’re looking at all kinds of things, trying to generate worker-driven solutions,” King said.

U.S. meatpacking workers were among those hard hit by the pandemic. Last year, the families of three Tyson workers in Iowa who died from COVID-19 sued the company, saying it knowingly put employees at risk in the early days of the outbreak.

Tyson said chicken production was also hurt by February storms that knocked out power to some of its hatcheries. As a result, Tyson spent $60 million more in its fiscal second quarter buying meat from outside suppliers for processing.

Tyson’s overall sales rose nearly 4% to $11.3 billion in the second quarter. That was ahead of Wall Street’s forecasts, according to analysts polled by FactSet.

Tyson's net income rose 26.5% to $476 million for the quarter. Its adjusted earnings of $1.34 per share also beat analysts' estimates.

Tyson's shares are up more than 22% so far this year. They slipped less than 1% in after-hours trading following the release of the earnings report.