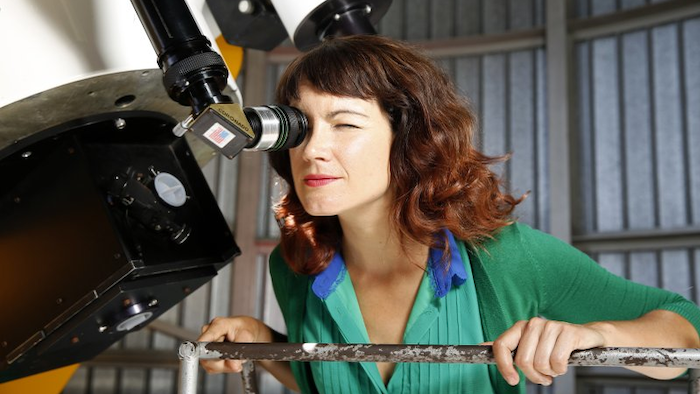 Lucianne Walkowicz looks at solar flares through a telescope at the Adler Planetarium's observatory in Chicago, Aug. 5, 2015.
Michael Tercha/Chicago Tribune via AP

MADISON, Wis. (AP) — A lawsuit filed by a Chicago astronomer who alleged the Wisconsin-based maker of American Girl dolls stole her likeness and name to create an astronaut doll has been dismissed after the two sides resolved the case.

The federal trademark lawsuit filed last year by Lucianne Walkowicz asked American Girl and its parent company, Mattel, to stop selling the Luciana Vega doll, described as “an aspiring astronaut ready to take the next giant leap to Mars."

A stipulation filed late Tuesday afternoon states that the suit has been addressed to the satisfaction of both sides and without any financial considerations. It contains no details about what’s contained in the settlement, the Wisconsin State Journal reported.

Walkowicz is a TED senior fellow at the Adler Planetarium in Chicago. She spent much of her career with NASA and has lectured extensively on Mars exploration. She said in her suit that the similarities included the purple streak in the doll's hair and her holographic shoes.

American Girl denied the allegations and said at the time it “takes great pride in creating original characters for girls.”

An attorney for Walkowicz and an American Girl spokeswoman did not immediately respond to messages seeking comment.