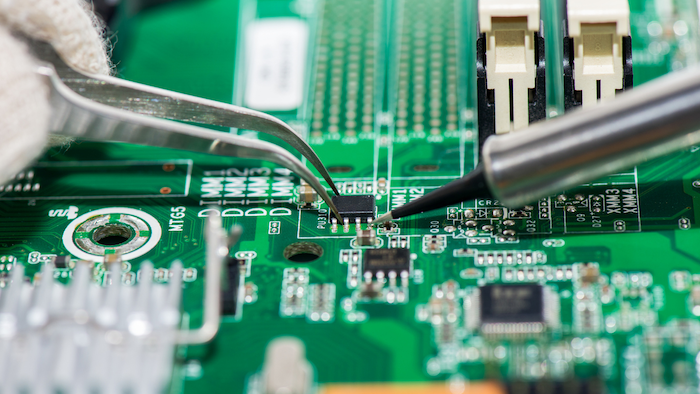 Nicholas and his team have developed more heat resilient silver circuitry with an assist from nickel. The team described the work, which was funded by the U.S. Department of Energy Solid Oxide Fuel Cell Program, on April 15 in the journal Scripta Materialia.

The types of devices that the MSU team is working to benefit -- next-generation fuel cells, high-temperature semiconductors and solid oxide electrolysis cells -- could have applications in the auto, energy and aerospace industries.

Although you can't buy these devices off the shelf now, researchers are currently building them in labs to test in the real world, and even on other planets.

For example, NASA developed a solid oxide electrolysis cell that enabled the Mars 2020 Perseverance Rover to make oxygen from gas in the Martian atmosphere on April 22. NASA hopes this prototype will one day lead to equipment that allows astronauts to create rocket fuel and breathable air while on Mars.

To help such prototypes become commercial products, though, they'll need to maintain their performance at high temperatures over long periods of time, said Nicholas, an associate professor in the College of Engineering.

He was drawn to this field after years of using solid oxide fuel cells, which work like solid oxide electrolysis cells in reverse. Rather than using energy to create gases or fuel, they create energy from those chemicals.

"Solid oxide fuel cells work with gases at high temperature. We're able to electrochemically react those gases to get electricity out and that process is a lot more efficient than exploding fuel like an internal combustion engine does," said Nicholas, who leads a lab in the Chemical Engineering and Materials Science Department.

But even without explosions, the fuel cell needs to withstand intense working conditions.

"These devices commonly operate around 700 to 800 degrees Celsius, and they have to do it for a long time -- 40,000 hours over their lifetime," Nicholas said. For comparison, that's approximately 1,300 to 1,400 degrees Fahrenheit, or about double the temperature of a commercial pizza oven.

"And over that lifetime, you're thermally cycling it," Nicholas said. "You're cooling it down and heating it back up. It's a very extreme environment. You can have circuit leads pop off."

Thus, one of the hurdles facing this advanced technology is rather rudimentary: The conductive circuitry, often made from silver, needs to stick better to the underlying ceramic components.

The secret to improving the adhesion, the researchers found, was to add an intermediate layer of porous nickel between the silver and the ceramic.

By performing experiments and computer simulations of how the materials interact, the team optimized how it deposited the nickel on the ceramic. And to create the thin, porous nickel layers on the ceramic in a pattern or design of their choosing, the researchers turned to screen printing.

Once the nickel is in place, the team puts it in contact with silver that's melted at a temperature of about 1,000 degrees Celsius. The nickel not only withstands that heat -- its melting point is 1,455 degrees Celsius -- but it also distributes the liquified silver uniformly over its fine features using what's called capillary action.

"It's almost like a tree," Nicholas said. "A tree gets water up to its branches via capillary action. The nickel is wicking up the molten silver via the same mechanism."

Once the silver cools and solidifies, the nickel keeps it locked onto the ceramic, even in the 700 to 800 degree Celsius heat it would face inside a solid oxide fuel cell or a solid oxide electrolysis cell. And this approach also has the potential to help other technologies, where electronics can run hot.

"There are a wide variety of electronic applications that require circuit boards that can withstand high temperatures or high power," said Jon Debling, a technology manager with MSU Technologies, Michigan State's tech transfer and commercialization office. "These include existing applications in automotive, aerospace, industrial and military markets, but also newer ones such as solar cells and solid oxide fuel cells."

As a technology manager, Debling works to commercialize Spartan innovations and he's working to help patent this process for creating tougher electronics.

"This technology is a significant improvement -- in cost and temperature stability -- over existing paste and vapor deposition technologies," he said.

For his part, Nicholas remains most interested in those cutting-edge applications on the horizon, things like solid oxide fuel cells and solid oxide electrolysis cells.

"We're working to improve their reliability here on Earth -- and on Mars," Nicholas said.