Critics say the ShotSpotter system routinely reports gunshots where there are none. 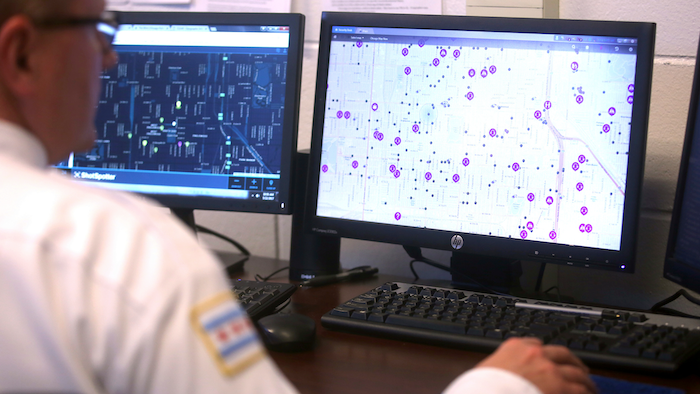 CHICAGO (AP) — The gunshot detection system that set in motion the recent fatal police shooting of a 13-year-old boy in Chicago routinely reports gunshots where there are none, sending officers into predominantly Black and Latino neighborhoods for “unnecessary and hostile” encounters, community groups argued in a court filing Monday.

The groups and the MacArthur Justice Center at Northwestern University's law school asked a Cook County judge to scrutinize the ShotSpotter system to determine if it is “sufficiently trustworthy” to be allowed as evidence in a criminal case. The filing supports a request by defense attorneys for a man charged with murder in a case in which prosecutors are using ShotSpotter information as evidence.

The groups say a study of Chicago police data found that over a nearly 22-month period ending in mid-April, almost 90% of ShotSpotter alerts didn't result in officers reporting evidence of shots fired or of any gun crime. The technology is only used in 12 police districts with the city's largest proportion of Black and Latino residents, which the groups say “inflates statistics about supposed gunfire in these communities, creating a faulty, tech-based justification for ever more aggressive policing.”

“These deployments create an extremely dangerous situation for residents, prompting unnecessary and hostile police encounters, and creating the conditions for abusive police tactics that have plagued Chicago for decades,” the groups wrote.

ShotSpotter, a California based company that produces the gunshot detection system, has contracts with over 100 police departments nationwide. In Chicago, it sent an average of 71.4 alerts to officers each day during the period studied, according to the court filing. That included the March 29 alert that led to the fatal shooting of 13-year-old Adam Toledo by a Chicago officer.

The Chicago Police Department and other agencies have long praised the system, saying it puts officers on the scene of shootings far faster than if they wait for someone to call 911 to report gunfire. In Chicago, its use was expanded in response to increases in violent crime; police say crime rates — not residents' race — determine where the technology is deployed.

On Monday, Mayor Lori Lightfoot said the technology, along with cameras and high-tech support centers staffed with police, “no question whatsoever is a lifesaver.”

Company officials say ShotSpotter improves police relationships with communities by enhancing investigations, more quickly transporting shooting victims to hospitals and responding to gunfire even if no one calls 911, which they say happens in most instances.

“Our technology fills the gap in Chicago and 110 other cities across the United States, helping deploy officers to crime in real-time, saving lives,” ShotSpotter said in a statement.

There was little question that shots were fired in the lead-up to Adam's death in a dark alley in Little Village, a predominantly Latino neighborhood. Days after Police Superintendent David Brown told the media that the sound of gunfire was picked up by ShotSpotter, the materials released to the public included both video that appeared to show someone firing several shots in the neighborhood and a ShotSpotter audio recording of the sound of that gunfire.

Police were responding to those shots when Officer Eric Stillman chased Adam and shot him, a split second after the boy appeared to drop or toss a gun.

The court filing tells a different story: one of a system that prompts officers to race to scenes where they think they may encounter armed suspects and are thus more inclined to use lethal force. It says the ShotSpotter system — which the business says detects gunshots with “97% accuracy” — sent Chicago officers on an average of 61 “dead end” searches per day, possibly because it doesn't accurately distinguish between shots and other loud noises, such as firecrackers and backfiring cars.

But the number of “dead end” searches does not address a reality in Chicago: People who fire guns often run away or, especially in a city where drive-by shootings are routine, gunmen are often blocks and even miles away by the time police arrive.

The system is especially dangerous in Chicago, according to the filing, because of the police department’s decades-long reputation for using unnecessary force.

“Residents who happen to be in the vicinity of a false alert will be regarded as presumptive threats, likely to be targeted by police for investigatory stops, foot pursuits, or worse,” the filing says.

Furthermore, dispatching officers to predominantly minority neighborhoods has not reduced crime in those areas.

“To the contrary, academic research has found that ShotSpotter and similar acoustic gunshot detection systems (“AGDS”) do not reduce serious violent crime and do not even increase the number of confirmed shootings that police identify,” according to the filing.

The groups involved in Monday's court filing include the Brighton Park Neighborhood Council, which represents residents in a predominantly Latino neighborhood of Chicago, and the digital-rights nonprofit organization Lucy Parsons Labs.