Rescuers in the air and the sea have been searching for the 19 workers who were aboard a vessel designed to support offshore oil rigs. 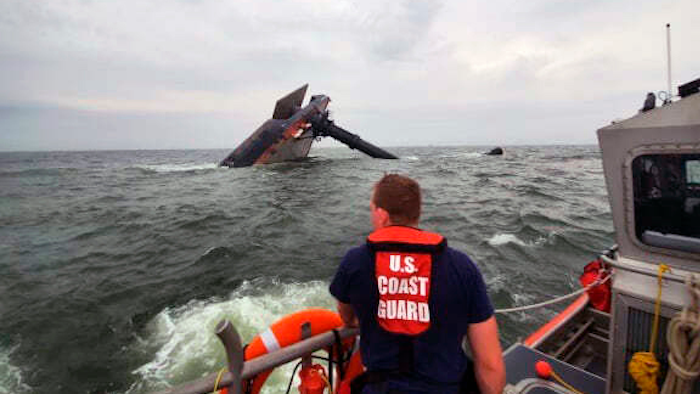 PORT FOURCHON, La. (AP) — Divers searching the site of a capsized lift boat off Louisiana recovered two more unresponsive crewmembers late Friday, the Coast Guard said after another day of frantic waiting by family members worried for the fate of those who went missing earlier this week.

Petty Officer Jonathan Lally, a Coast Guard spokesman, declined to elaborate on the latest two found and referred questions from The Associated Press to a local coroner. A Coast Guard statement said commercial divers on the capsized Seacor Power lift boat found the crewmembers. But the Coast Guard said it was not releasing the names of any of those rescued, recovered or still missing out of respect for the privacy of their families.

"Our deepest sympathy goes out to the family, friends and loved ones of everyone involved in this tragic incident," said Capt. Will Watson, commander of Coast Guard Sector New Orleans. "We are using every asset available to us to continue our search efforts."

Rescuers in the air and the sea have been searching for the 19 workers who were aboard the vessel, which is designed to support offshore oil rigs, when it overturned Tuesday in rough weather about 8 miles (13 kilometers) south of the Louisiana coast. Nine remain missing. "Right now, we're hoping for a miracle," said Steven Walcott, brother of missing worker Gregory Walcott.

Six people were rescued Tuesday shortly after the vessel capsized, and one body was recovered from the water Wednesday. A second body was found Thursday night, according to a Coast Guard news release. The boat has three legs designed to extend to the sea floor and raise the ship so it can serve as a platform for nearby rigs.

The hope of loved ones is that those still missing have found air pockets to survive inside the ship. But authorities haven't reported any contact with anyone inside the ship since Tuesday. On Thursday, searchers knocked on the ship's hull without response. Meanwhile, feelings of shock and worry were turning to frustration and anger for families of the missing.

"It just keeps going on and on," said Frank Boeckl, whose nephew, Larry Warren, was among the missing workers. "They need more divers in that water, and every family feels this way. It's not just me." Time is of the essence because any air pockets will eventually become depleted of oxygen, said Mauritius Bell, diving safety officer at the California Academy of Sciences: "At some point, it's not survivable."

Divers had gone into the water Friday but came back up at mid-morning as the weather became too dangerous to continue, the Coast Guard said in a news release. They then resumed diving Friday afternoon, and the Coast Guard said they would continue the searching through the evening, weather permitting.

Steven Walcott said the dive teams should have been working around the clock from the start. "It was more complicated than it should have been," said Walcott, who like his brother has worked on lift boats for more than 20 years. But he said he was trying to remain optimistic, knowing his brother would do what he needed to survive, but it was getting harder with each passing day. "We're just keeping hope," he said.

Two of the missing workers had been communicating with rescuers by two-way radio Tuesday after the ungainly platform ship flipped over in hurricane-force winds that day. They were spotted clinging to the overturned hull but returned to seek shelter inside after a third man fell into the water and was lost.

Relatives of the missing have gathered at Port Fourchon, a sprawling base for much of the offshore oil and gas industry in the Gulf of Mexico. The port, busy with cranes, cargo and heavy equipment, is where workers from across Louisiana and beyond load up on a fleet of helicopters and ships that take them to the rigs for long stretches of work.

"It's nerve-wracking" for relatives waiting for news, said Chett Chiasson, executive director of the Lafourche Parish port, where families of the workers gathered Friday for a briefing on rescue efforts. "Obviously there's some frustration there, not knowing about their loved one and not hearing from their loved one," he said. At the same time, he said: "There's still some hope there."