Dakota Access was the subject of months of sometimes-violent protests in 2016 and 2017 during its construction. 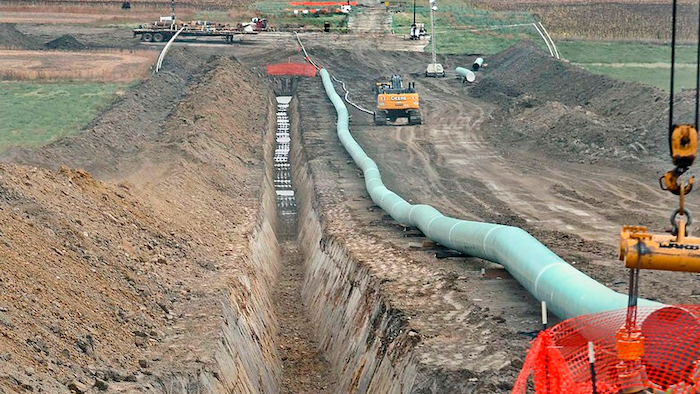 In this October 2016 file photo, construction continues on the Dakota Access pipeline. A hearing was scheduled for Friday, April 9, 2021, to determine whether the Dakota Access oil pipeline should be allowed to continue operating without a key permit while the U.S. Army Corps of Engineers conducts an environmental review on the project.
Tom Stromme/The Bismarck Tribune via AP, File

BISMARCK, N.D. (AP) — A judge on Friday delayed a decision on whether the Dakota Access Oil pipeline should be shut down while the U.S. Army Corps of Engineers conducts an environmental review on the project, after lawyers for the pipeline asked for more time to outline the effects of recent changes in the economy.

U.S. District Judge James Boasberg granted the 10-day continuance after the Biden administration declined to intervene in the case, which an attorney for the Standing Rock Indian Reservation said is “deeply” disappointing to the tribes.

“The decision here today is to keep operating, which is the same decision as the previous administration,” Earthjustice attorney Jan Hasselman said during the hearing. “The company gets to keep the benefits of operating the pipeline that was never properly authorized while the community has to bear the risks and the consequences.”

Boasberg ordered the hearing mainly for the Corps to explain how it could proceed without a federal permit granting easement for the $3.8 billion pipeline to cross beneath Lake Oahe, a reservoir along the Missouri River that is maintained by the Corps. Corps attorney Ben Schifman told the judge that the agency might act on the permit issue at some time, which Boasberg described as a possibility of “sooner, later or not at all.”

The hearing in Washington, D.C., was originally scheduled for February. But the Corps filed a motion to postpone the hearing in order to allow officials from Biden's administration more time to familiarize themselves with the case, including the 2016 lawsuit filed by the Standing Rock Sioux Reservation in an attempt to stop construction.

“I too am a little surprised that this is where things stand 60 days later,” Boasberg said. “I would have thought there would be a decision one way or another at this point.”

Hasselman said he expected the Corps to make a decision Friday and objected to the delay.

Hasselman told reporters that the hearing Friday was a chance for the Biden administration to prove its commitment to improving tribal relations and the environment.

“Today was the day to see whether this rhetoric was going to be matched with action and they fell short,” Hasselman said.

Pipeline attorney David Debold said “a lot has happened with our economy and overall markets” in the last five months and the continuance is warranted.

Boasberg in April 2020 ordered further environmental study after determining the Corps had not adequately considered how an oil spill under the Missouri River might affect Standing Rock’s fishing and hunting rights, or whether it might disproportionately affect the tribal community.

Texas-based Energy Transfer estimated it would cost $24 million to empty the oil and take steps to preserve the pipe. It said it would have to spend another $67.5 million each year to maintain the line while it’s inoperable. The company did not immediately return messages for comment left Friday.

The $3.8 billion, 1,172-mile (1,886-kilometer) pipeline crosses beneath the Missouri River, just north of the Standing Rock Sioux Reservation that straddles the North Dakota-South Dakota border. The tribe, which draws its water from the river, says it fears pollution.

The pipeline was the subject of months of sometimes-violent protests in 2016 and 2017 during its construction. The tribe took legal action against the pipeline even after it began carrying oil from North Dakota across South Dakota and Iowa to a shipping point in Illinois in June 2017.

Former President Barack Obama's administration originally rejected permits for the project, and the Corps prepared to conduct a full environmental review. In February 2017, after Donald Trump took office, the agency scrapped the review and granted permits, concluding that running the pipeline under the Missouri River posed no significant environmental issues.