“Cooperation is the only correct choice,” said China's commerce manager. 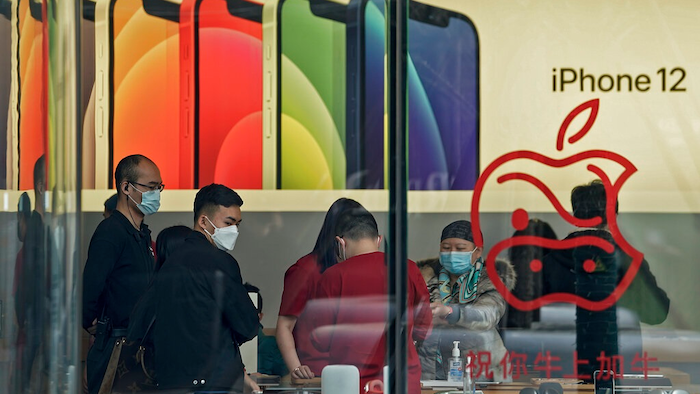 People wearing face masks to help curb the spread of the coronavirus look at iPad devices at an Apple store at the capital city's popular shopping mall in Beijing on Wednesday, Feb. 24, 2021. China’s commerce minister appealed to Washington for “join efforts” revive trade but gave no indication Wednesday when tariff war talks might resume or whether Beijing might offer concessions.
AP Photo/Andy Wong

BEIJING (AP) — China’s commerce minister appealed to Washington for “joint efforts” to revive trade but gave no indication Wednesday when tariff war talks might resume or whether Beijing might offer concessions.

“Cooperation is the only correct choice,” Wang Wentao said at a news conference.

President Joe Biden has yet to announce a strategy for dealing with Beijing but is widely expected to renew pressure on trade and technology complaints that prompted his predecessor, Donald Trump, to raise taxes on Chinese imports.

Wang said he looked forward to “joint efforts” to “push bilateral economic and trade relations back to the track of cooperation.” He noted President Xi Jinping talked with Biden by phone on Feb. 11 but gave no indication when negotiations might resume.

Washington and Beijing have raised tariffs on billions of dollars of each other's goods, disrupting global trade. They agreed last January to postpone further penalties but most taxes already imposed stayed in place.

Beijing agreed to narrow its trade surplus with the United States by purchasing more American soybeans and other exports. It fell short of the targets set due to the coronavirus pandemic and bought about 55% of the promised goods.

China’s foreign trade situation is “severe and complicated,” Wang said. He said Beijing is launching e-commerce and other initiatives to encourage sales. One focus will be markets in its “Belt and Road Initiative” to build ports, railways and other trade-related infrastructure.