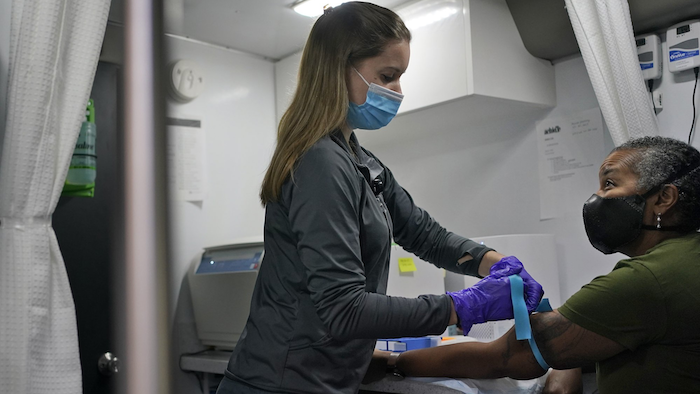 NEW YORK (AP) — Lani Muller doesn’t have to visit a doctor’s office to help test an experimental COVID-19 vaccine — she just climbs into a bloodmobile-like van that parks on a busy street near her New York City neighborhood.

The U.S. is rightly fixated on the chaotic rollout of the first two authorized vaccines to fight the pandemic. But with more vaccines in the pipeline — critical to boosting global supplies — scientists worry whether enough volunteers will join and stick with the testing needed to prove if they, too, really work.

Those studies, like earlier ones, must include communities of color that have been hard-hit by the pandemic, communities that also voice concern about the vaccination drive in part because of a long history of racial health care disparities and even research abuses. To help, researchers in more than a dozen spots around the country are rolling out mobile health clinics to better reach minority participants and people in rural areas who might not otherwise volunteer.

Muller, who is Black, said her family was worried about the vaccine research so she didn’t mention she’d signed up to test AstraZeneca’s shot.

“The legacy of African Americans in science in these sort of trials hasn’t been great and we haven’t forgotten,” said Muller, 49, a Columbia University employee whose participation in some prior research projects made her willing to get a test injection earlier this month.

Muller knows more than 20 people who have gotten or died from COVID-19. “I’m much more afraid of the disease than the vaccine trial," she said.

From the beginning, the National Institutes of Health was adamant that COVID-19 vaccines be tested in a population about as diverse as the nation's — key to building confidence in whichever shots proved to work. In studies of the Pfizer and Moderna shots so far cleared for widespread U.S. use, 10% of volunteers were Black, and more were Hispanic.

Diversity is an even tougher challenge now. The high-risk volunteers needed for final testing of other vaccine candidates have to decide if they want to stick with an experimental injection — one that might be a dummy shot — or try to get in line for a rationed but proven dose.

AstraZeneca, with about 30,000 volunteers so far, didn't release specific numbers but said the last weeks of enrollment are focusing on recruiting more minorities and people over age 65. Another maker, Novavax, just began recruiting for its final testing last month.

Studying the vaccines in diverse populations is only one step in building trust, said Dr. Wayne Frederick, president of Howard University, a historically Black university in the nation's capital.

Howard's hospital shared video of Frederick and other health workers getting vaccinated as a public service announcement encouraging African Americans to get their own shot as soon as it's their turn.

Frederick, a surgeon who's also at high risk because of diabetes and sickle cell disease, said he's dismayed to get emails espousing conspiracy theories such as that vaccination is “an experiment on African Americans.”

“There is misinformation that does require all of us to be in the forefront of getting involved and challenging it," he said.

But efforts to build confidence in the vaccines could be undermined if, once there's more supply to go around, hard-hit minority communities get left behind.

“The equity issue is absolutely important,” said Stephaun Wallace, a scientist at the Fred Hutchison Cancer Research Center who also is part of the NIH-created COVID-19 Prevention Network that helps with vaccine research and education. “It's important that we ensure that the vaccine is getting to the people, and that is an access issue."

Using vans to reach at-risk communities has long been a staple of fighting HIV, another illness that has disproportionately struck Black Americans. And as more doses of the Pfizer and Moderna COVID-19 vaccines arrive, mobile clinics are expected to help expand COVID-19 vaccination access, especially in rural areas.

But the NIH program has a different focus, offering RV-sized mobile clinics from Matrix Medical Network to help improve the diversity of ongoing vaccine studies. Officials say they've been used at a Lakota reservation, at chicken-processing plants with a largely Hispanic workforce, and in cities like Washington where Howard University is recruiting volunteers for the new Novavax study.

“I don’t think we can sit in the ivory towers and hope that people come to us. I think that would be a mistake,” said Howard's Frederick.

Researchers from the New York Blood Center regularly park their lab-on-wheels in parts of Queens and Brooklyn with large Black, Asian and Hispanic populations, so that even after study enrollment ends the participants can pop in for required check-ups.

They also make a point of standing outside to answer questions from passersby confused about COVID-19 vaccination in general.

It's "building trust and rapport,” said Dr. Jorge Soler, who helps study the AstraZeneca vaccine as part of the blood center's Project Achieve. “I’m Latino and I’m a scientist. To be able to say that to people means something.”

Soler sometimes has to dispel fears that getting vaccinated might mean being “injected with a chip," or having information collected for surveillance purposes.

He stresses that the Pfizer and Moderna shots now being used cannot give someone the coronavirus — that's biologically impossible as neither is made with the actual virus.

And over and over, people wonder how these vaccines appeared so quickly.

Soler’s simple explanation for how to speed research without cutting corners? “This is what happens when the world is invested in something. You build a car faster with 20 people than you do with two.”