The call follows the sudden death of a young employee at a leading e-commerce platform. 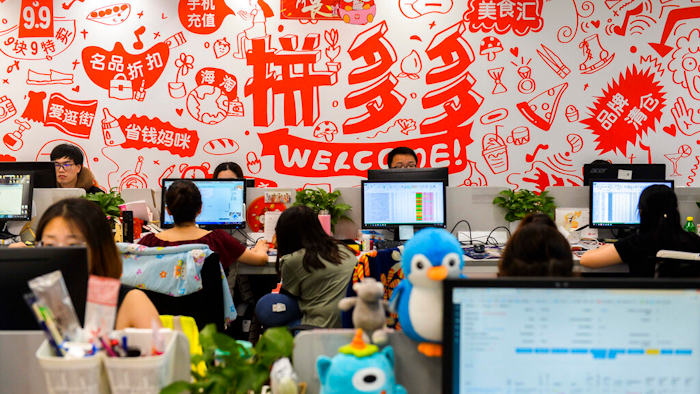 Workers at the headquarters of e-commerce platform Pinduoduo, Shanghai, July 25, 2018.
Chinatopix via AP

Last month's tragedy refocused attention on “the pain of an abnormal culture of overtime," Xinhua said in a brief editorial posted Tuesday on its Twitter-like Weibo account.

Dreams should be pursued through striving, but workers’ legitimate rights and interests should not be sacrificed and employers may be breaking the law in encouraging health-sapping overwork, Xinhua said.

“Strengthening the protection of legal rights and interests for workers, letting those chasing their dreams run along in a healthy manner and introducing more warmth into the development of enterprises — that's the form striving should take," the news agency said.

The editorial follows the Dec. 29 death of a 22-year-old employee of Pinduoduo as she was walking home with a colleague at 1:30 a.m. Few details have been released, other than that the woman apparently suffered stomach pains before collapsing, but internet users have seized on the case as an example of the health impacts of long working days.

Grueling hours have long been a hallmark of China’s tech industry, heralded by business luminaries such as Alibaba’s Jack Ma, one of China’s richest and most prominent entrepreneurs. Ma drew controversy in 2019 by endorsing the “996" week, entailing working from 9 a.m. to 9 p.m. Monday through Saturday, with many arguing that would further discourage young people from marrying and having children.

The ruling Communist Party's flagship People's Daily newspaper even weighed in at the time, saying it was unfair of dictatorial managers to demand excessive overtime.

Worldwide, the tech sector is known for demanding long hours spent designing, coding and processing customer requests. While Chinese labor law limits the work week to five days and no more than 44 hours, increasing numbers of people work outside the state sector or in the informal economy where such regulations tend not to be adhered to as closely.