The alleged attack toppled a large tower at the Amuay Refinery on the Caribbean coast. 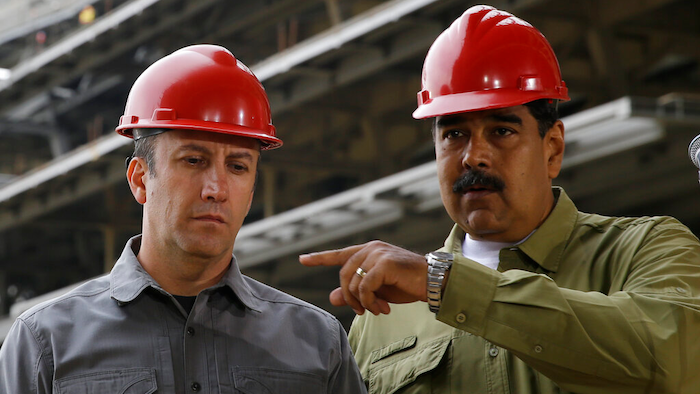 CARACAS, Venezuela (AP) — Venezuelan President Nicolás Maduro said Wednesday that a large oil refinery suffered a “terrorist attack” as his government struggles to provide domestic fuel to the nation amid a historic political and economic crisis.

Maduro spoke at a nationally televised news conference, touching on a wide range of topics that included his country's deep ties with Iran and opening a probe into the secret departure of a leading political adversary, Leopoldo López, who recently fled after being holed up for months in the Spanish ambassador's residence.

Maduro gave few details of the alleged attack Tuesday that he said toppled a large tower at the Amuay Refinery on Venezuela’s northern Caribbean coast. He said it was carried out with a “large and powerful” weapon, which was still under investigation.

The president also said two foreigners tied to extremist groups were detained a day prior to the incident with plans to kill Venezuelan leaders. Maduro did not identify the them, give their nationality or explain whether they had ties to the refinery attack.

This follows the arrest a month earlier in the same part of Venezuela of a U.S. citizen, Matthew John Heath, who Maduro has labelled a CIA spy. He has been charged with terrorism, weapons trafficking and conspiracy.

“Venezuela is confronting a permanent conspiracy against our life, against our strategic industry, against the electricity service, the refinery, the oil industry, public services,” Maduro said.

Venezuela has been in an economic crisis, which critics blame on two decades of failed socialist policies that have left the nation bankrupt and its infrastructure crumbling. Maduro says he is under attack from Washington, which wants to oust him from power.

Venezuela was once a wealthy oil nation, but its broken refineries fail to produce enough fuel for drivers to fuel up their cars. Venezuela in recent months has begun importing gasoline from Iran, another nation that has been hit with U.S. sanctions.

In the Heath case, the American was arrested while in a car with three Venezuelans — National Guard Sgt. Major Darwin Urdaneta, Marcos Garcés and Daeven Rodríguez. The three Venezuelans have been charged with treason, terrorism, arms trafficking and conspiracy.

The alleged attack on the refinery Tuesday comes amid a long and bitter relationship with the United States, which has imposed heavy sanctions on Maduro. The U.S. has also indicted him as an purported narcoterrorist, putting a $15-million reward for his arrest.

Washington backs opposition leader Juan Guaido, who claimed presidential powers in early 2019 as head of the National Assembly. A coalition of more than 50 nations recognize him, saying Maduro clings to power after an undemocratic election.

Maduro, who spoke for nearly two hours, said Venezuela and Iran share ″deep, spiritual, political” ties, but he denied that he is buying weapons from Tehran, despite recent reports. He didn't dismiss the possibility of doing so in the future.

“It seems like a very good idea to buy missiles from Iran,” Maduro said. “When the time is right, we’ll consider it.”

Maduro also said authorities in his government are launching a legal probe into who is responsible for helping López, among Venezuela's most popular opposition figures, sneak from the Spanish ambassador's residence in Caracas over the weekend and reappear in Madrid, to rejoin his wife and children.

López was sentenced in 2015 to nearly 14 years in prison after being convicted of inciting violence during anti-government protests. He was released from a military prison in 2018 but last year he broke his house arrest to join Guaidó in a failed military uprising aimed at ousting Maduro.

López spent the last 18 months in the Spanish ambassador's residence, out of Maduro's grasp. Maduro said Wednesday that there was a "negotiation” between López and the Spanish government to realize his surprise departure.

Maduro also attacked Spain's outgoing ambassador to Caracas, Jesús Silva, whom he called a “racist” and a “coup plotter,” accusing him of being linked to failed raid on the coast in May that led to the arrest of several dozen rebel Venezuelan fighters and two former ex-U.S. special forces soldiers, now jailed in Venezuela.

Silva is expected to leave Venezuela next week at the end of his diplomatic tenure in Venezuela. Maduro said he was willing to provide Silva with a plane to leave the country.

López on Tuesday spoke publicly in Madrid for the first time since leaving Venezuela. He denied there were any negotiations for his clandestine departure.

“Only five people knew about it, nobody else, not even my wife,” he said. “I organized it with the people who helped me and whom I’m going to protect.”