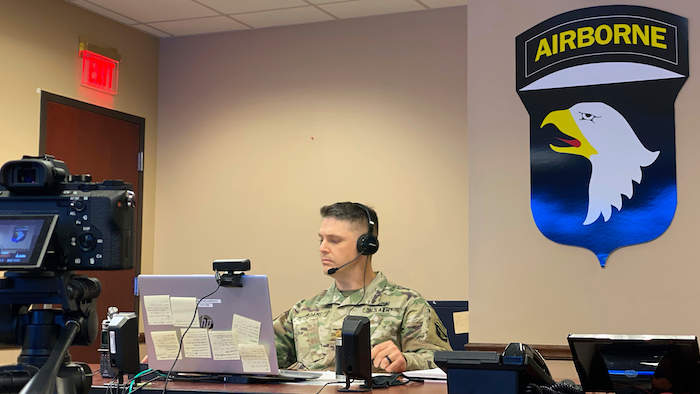 CHARLOTTE, N.C. (AP) — In combat, U.S. Army Maj. Evan Adams is a tank officer responsible for leading intricate cavalry and reconnaissance operations. But more than a decade ago, he was a graphic design major in college, a skill he put to use in a new Army effort aimed at gathering innovative ideas from within.

On Wednesday, the 18th Airborne Corps announced Adams as the winner of their inaugural Dragon Innovation Challenge. Amid government red tape and military bureaucracy, the “Shark Tank” like competition hopes to harvest new ideas from the bottom up.

Col. Joseph Buccino, spokesman for the 18th Airborne Corps, sees this as a way of unlocking hidden, untapped talent.

“Our soldiers see inefficiencies in their daily lives and, in many cases, develop solutions,” he said.

The challenge plans to address various shortcomings across the Army. Soldiers have submitted ideas to an online platform detailing solutions for tackling issues such as unit morale, ammunition storage and the behavioral health provider shortage.

The first round of the competition asked soldiers to address the challenges associated with training and shooting ranges on base. The current software used to do so is more than a decade old.

Of 84 initial submissions, Adams’ idea for a mobile application to schedule and manage gun ranges and land on Army installations across the country in real time took the top spot.

Adams’ app will be built and tested across the 18th Airborne Corps’ seven installations. They hope to see the first phase of the rollout completed within 160 days.

The 36-year-old, who's assigned to the 101st Airborne Division at Fort Campbell, Kentucky, spoke humbly about his win while making breakfast for his two young children Wednesday morning. Next week, he’ll ring the opening bell of the New York Stock Exchange.

“Hopefully this is successful — not for me, but for this entire program," he told The Associated Press.

Adams sees this competition as a no-brainer for the Army to tap into its diverse talent. The former recruiter refutes the stigma he sometimes encountered that many who go into the service have little else going for them.

“It’s just not true,” Adams said. “The people I meet in the Army are the most creative, the smartest folks, the most disciplined.”

Master Sgt. Roy Smith, who sat on the panel that selected Adams’ idea, said the competition gives soldiers from the bottom up the chance to make broad changes necessary to the Army.

“It gives soldiers a voice at that level," Smith said. "I think it’s motivational to anyone with a good idea.”

The next Dragon Innovation Challenge, set for Nov. 17, will be open to a broader focus of topics and ideas.