Customs officials said the gloves were made in a region where China's government has imprisoned more than 1 million people. 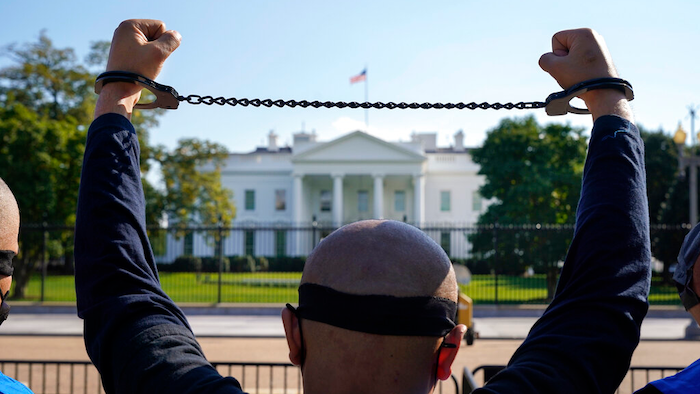 A member of the Uyghur American Association rallies in front of the White House, Thursday, Oct. 1, 2020, after marching from Capitol Hill in Washington, in support of the Uyghur Forced Labor Prevention Act which has passed the House and now will go on to the Senate. The bill prohibits some imports from Xinjiang and imposes sanctions for human rights violations.
Associated Press

WASHINGTON (AP) — A shipment of women’s gloves at a California port has been traced to a factory that uses forced labor of people caught up in a brutal crackdown on ethnic minorities in China, U.S. authorities said Thursday.

U.S. Customs and Border Protection said the shipment of 1,900 pairs of gloves will be held at the Port of Los Angeles/Long Beach unless the American company that was seeking to import the material can prove it wasn't made with forced labor.

Overland, a retailer based in Fairfield, Iowa, was seeking to import the gloves and says it has provided proof to Customs that the goods were not made with forced labor and should be released.

Customs said the gloves were made by the Yili Zhuowan Garment Manufacturing Company in Xinjiang, a region of northwestern China where the government has imprisoned more than 1 million Uighurs and other mostly Muslim minorities as part of an ethnic assimilation campaign.

Last month, the Trump administration identified Yili as one of several companies suspected of forcing people into the equivalent of modern-day slavery and said it would be prohibited from importing goods into the United States.

The administration, which has clashed with China on a range of issues, including trade and the coronavirus outbreak, has also increased enforcement of a U.S. law that bans the importation of goods made with forced labor.

Under the law, the importer generally has three months to submit proof that the goods are not tainted. If not the goods are seized and typically destroyed.

Overland, which specializes in outerwear, said an independent inspection company in China evaluated conditions at the facility in Xinjiang and determined there were no abusive conditions, said Linda Vivier, director of inventory of the family-owned company.

“Obviously, Overland wants to make sure everybody is safe and well taken care of, and that's the reason we have this third-party inspection company that can go to each factory and make sure that everybody is being treated well and fairly and that we are in compliance,” Vivier said.

Their report has been submitted to Customs and Border Protection and they are awaiting a response and hope to retrieve the gloves.

Labor and human rights groups say it's impossible to conduct legitimate inspections in Xinjiang because of the oppressive conditions. The Chinese Communist Party has an intensive surveillance network as part of its campaign to force ethnically distinct minorities to assimilate into the dominant culture.

U.S. officials say it's up to companies doing business in the United States to ensure their supply chains are free of material made under coercive conditions.

“CBP will not tolerate modern slavery in U.S. commerce,” Brenda Smith, executive assistant commissioner of the agency's Office of Trade, said in a statement announcing the detention of the glove shipment.

A bipartisan bill that would declare that all goods manufactured in Xinjiang are the product of forced labor, and therefore banned from the country, passed overwhelmingly last month in the House of Representatives. If enacted, it could have significant effects on commerce since the region is a major source of cotton and other goods.

China has denied widespread and consistent reports of abuse and mistreatment of the Uighurs and other minorities, defending the campaign as an effort to crackdown on extremism and claiming the detention camps are for vocational and Chinese language training.