The ring laundered money stolen from victims in the U.S. and European countries. 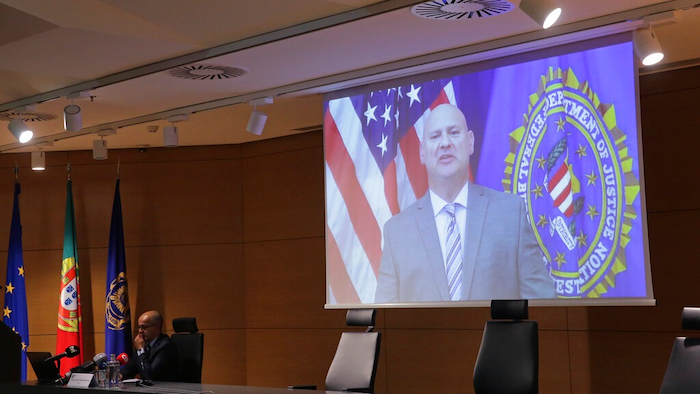 FBI Pittsburgh Special Agent Michael Christman speaks in a video presented by Portuguese police chief inspector Paulo Goncalves, at left, during a news conference at the police headquarters in Lisbon, Thursday, Oct. 15, 2020. European and American officials say that they have arrested 20 individuals for allegedly belonging to an international ring that laundered millions of euros stolen by cybercriminals in an international police operation led by Portuguese investigators and the F.B.I.
AP Photo/Armando Franca

LISBON, Portugal (AP) — European and American officials said Thursday that they have arrested 20 people in several countries for allegedly belonging to an international ring that laundered millions of euros stolen by cybercriminals through malware schemes.

The international police operation “2BaGoldMule” led by Portuguese investigators and the FBI included 14 more European countries, under the umbrella of Europol. Europol said that more than 40 homes were searched by agents in Spain, Italy, Bulgaria and Latvia in the operation.

The ring “QQAAZZ” allegedly laundered cybercriminals’ stolen funds, transferring them between hundreds of bank accounts held in banks across the world, officials said. The ring included citizens of Russia, Latvia, Georgia, Bulgaria, Romania, and Belgium, according to the U.S. Justice Department. The ring laundered money stolen from victims in the U.S. and European countries. The suspects face criminal investigations in the U.S., Portugal, Spain and the U.K.

“This operation has shown that through this cooperation we can collectively tackle the global nature of cybercrime. This is the only way forward,” said Carlos Cabreiro, director of Portugal’s National Unit for Fighting Cybercrime.