The candidates ensure that a woman will hold the top job for the first time. 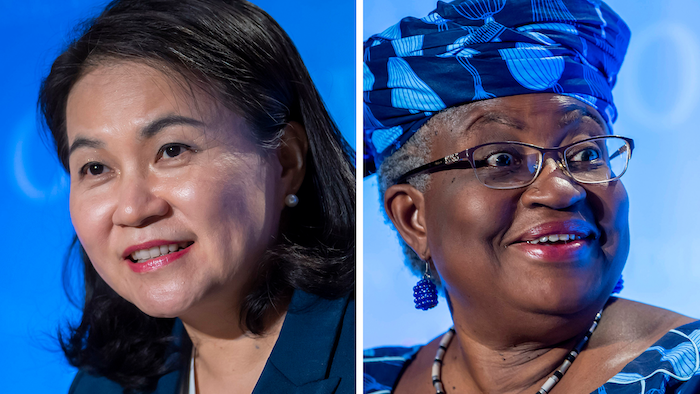 GENEVA (AP) — The World Trade Organization says South Korea’s trade minister and a Harvard-trained former Nigerian finance minister have qualified as the two finalists to become the next director-general, ensuring a woman in the top job for the first time.

WTO spokesman Keith Rockwell said Thursday that a selection committee found Ngozi Okonjo-Iweala of Nigeria and Yoo Myung-hee of South Korea qualified for the final round in a race expected to end in the coming weeks. They were picked out of a pool of five candidates.

A previous round had cut the list of candidates from eight to five. The winner is expected to be announced no later than early November.

The previous WTO director-general, Roberto Azevedo of Brazil, made a surprise announcement in May that he would leave the job a year early, citing a “personal decision.” He left without a successor on Aug. 31.

Azevedo’s seven-year tenure was marked by intense pressure from U.S. President Donald Trump, who repeatedly accused the WTO of “unfair” treatment of the U.S. and started a trade war with China in defiance of the WTO system.

The WTO, which was created in 1995 out of the former General Agreement on Tariffs and Trade, has never had a woman director-general or national from Africa as its leader.