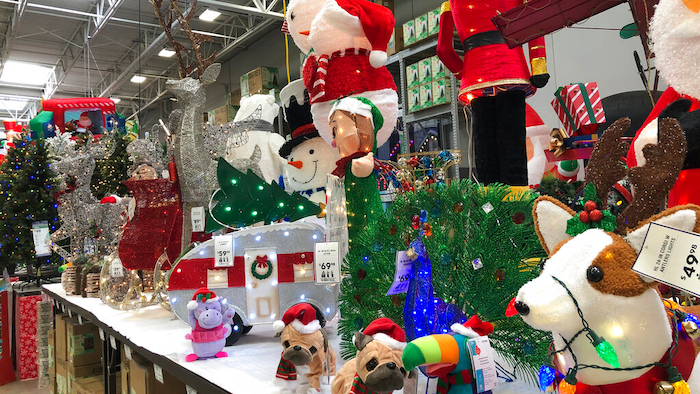 NEW YORK (AP) — Add last-minute holiday shopping to the list of time-honored traditions being upended by the coronavirus pandemic. Retailers are kicking off the holiday season earlier than ever this year in hopes of avoiding big in-store crowds and shipping bottlenecks in November and December.

Stores like Best Buy, Macy’s, and Target typically offer their biggest Black Friday deals over Thanksgiving weekend, but now they're starting them in October so people don’t crowd their stores later, creating a potentially dangerous situation during a pandemic.

And with more people expected to shop online, retailers are trying to avoid a rush of orders closer to Christmas, which could lead to late packages and more expensive shipping. Many had a hard time keeping up with the surge in buying when shoppers were locked down in their homes during the early days of the pandemic. Even Amazon, which has spent 25 years building warehouses and a delivery network, had to hire an additional 175,000 workers to meet demand.

Black Friday has long been the unofficial start to the U.S. holiday season, though retailers have been pushing holiday shopping earlier for the last decade or so.

This year there’s more urgency. With the coronavirus still spreading in the U.S., stores have had to rethink their usual holiday plans. Thanksgiving Day doorbusters are canceled. There will still be in-store sales the day after Thanksgiving, but companies are expected to try to steer many shoppers to their websites to avoid crowds and chaos.

“We’re preparing for a holiday season unlike any we’ve seen before,” said Target CEO Brian Cornell.

With many people out of work and even more uncertain about their economic futures, this isn’t expected to be a banner year for holiday sales. Shoppers will likely buy fewer gifts because they won't be traveling to big family holiday gatherings. And they'll be focused on gifts related to activities around the home, from workout wear to home goods and gaming consoles. One bright spot: People are spending less on experiences like travel and eating out, which have siphoned away holiday sales over the past few years.

“Shoppers are going to be very selective in what they buy,''' said Ken Perkins, president of Retail Metrics, a retail research firm. “Retailers, particularly department stores and specialty clothing chains, need to get it right in terms of inventory and customer traffic. They're fighting for their lives."

The first big holiday push will come from Amazon, which is positioning its mid-October Prime Day as a kickoff to the holiday shopping season. This is the first time Amazon has held Prime Day so close to the holidays. It’s usually in July, but was postponed this year.

That will put pressure on stores to offer deals around the same time, too. Target and Walmart have already said they will hold their own sales during the same time as Amazon's. Best Buy will offer deals in October, earlier than it ever has.

Even with the early start to the season, holiday sales are expected to deliver smaller gains than in recent years. But no one really knows what's going to happen.

Joel Bines, who runs the retail practice at AlixPartners, thinks the earlier shopping will stick even when the pandemic is over. He likens it to when most major stores started opening on Thanksgiving Day after one or two stores did it for the first time a decade ago as a way to jumpstart Black Friday sales.

“This is here to stay,” Bines said. “The new holiday season is October through January.”

There are already signs of early shopping. Kohl’s said shoppers have started searching for stocking stuffers and matching family pajamas on its website.

Retailers will try their hardest to woo procrastinators. In October, TV and online ads paid for by trade group National Retail Federation will push people to buy early.

MadaLuxe, which has three stores and distributes luxury goods to discount chains, is bringing in holiday items like blankets, pillows and picture frames in mid-October, a month earlier than usual.

″I don’t think our customers are looking at holiday, but we want them to,” said MadaLuxe CEO and president Adam Freede.

Sasha Vuillaume has already bought Disney Princess figurines for her 5-year-old daughter as a Christmas gift. And if Amazon has a Prime Day deal on the Barbie camper her daughter wants, the veterinary receptionist from Lakewood, Ohio, will probably buy it then.

But Vuillaume expects much of her holiday shopping to be at Target, ordering online and picking up at the store. She wants to spend as little time inside as possible. Before COVID-19, she would grab a drink at Starbucks and wander around the aisles of Target.

“That was kind of my downtime,” she said. “Now I can’t really do that.”

Stores like Best Buy and Kohl's know that many shoppers like Vuillaume want to avoid being inside for long and are expanding services that allow them to buy items online and pick them up at the store. Some small businesses are joining in. E-commerce platform Shopify, for example, started offering a way for its merchants with physical shops to add curbside pickup.

Retailers are also making plans for people who don't want to go to a store at all.

Expecting to sell more of its rings and diamond bracelets online, Signet Jewelers, the owner of the Zales and Kay Jewelers chains, made tweaks at its Ohio warehouse so it can ship five times as many packages as last year.

Meanwhile, delivery company DHL is advising retailers to avoid holding big sales in December, since delivery could be delayed, said Kraig Foreman, the company’s president of e-commerce in North America, who works with nearly 30 retail chains.

Some are already seeing shipping delays.

Balsam Hill, which sells high-end artificial Christmas trees online, is warning shoppers on its website that shipping could take twice as long than the typical three to four days.

People seem to be in the holiday spirit already. Mac Harman, CEO of parent company Balsam Brands, said sales rose in July and continue to be so high that he's worried the company could run out of faux trees by Black Friday.

″I don’t want to let customers down in a year where we need more joy than ever,” he said.