The material temporarily stores energy — changing the color of the light it emits — and self-erases in a matter of days. 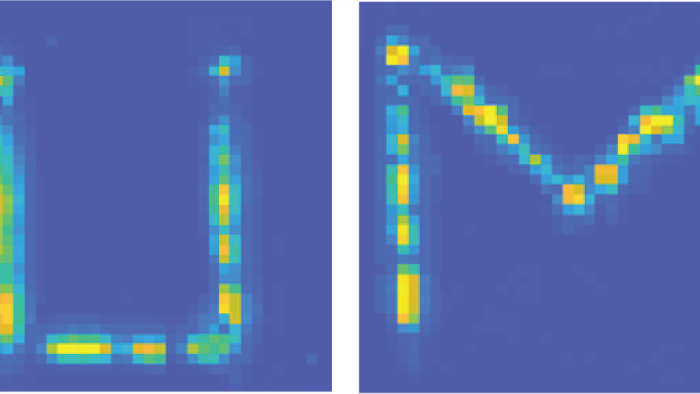 Letters written with UV light that will self-destruct in seven days, or it can be erased with a flash of blue light.
Che-Hsuan Cheng, Excitonics and Photonics Lab/University of Michigan

Self-erasing chips developed at the University of Michigan could help stop counterfeit electronics or provide alerts if sensitive shipments are tampered with.

They rely on a new material that temporarily stores energy, changing the color of the light it emits. It self-erases in a matter of days, or it can be erased on demand with a flash of blue light.

"It's very hard to detect whether a device has been tampered with. It may operate normally, but it may be doing more than it should, sending information to a third party," said Parag Deotare, assistant professor of electrical engineering and computer science.

With a self-erasing bar code printed on the chip inside the device, the owner could get a hint if someone had opened it to secretly install a listening device. Or a bar code could be written and placed on integrated circuit chips or circuit boards, for instance, to prove that they hadn't been opened or replaced on their journeys. Likewise, if the lifespan of the bar codes was extended, they could be written into devices as hardware analogues of software authorization keys.

The self-erasing chips are built from a three-atom-thick layer of semiconductor laid atop a thin film of molecules based on azobenzenes--a kind of molecule that shrinks in reaction to UV light. Those molecules tug on the semiconductor in turn, causing it to emit slightly longer wavelengths of light.

To read the message, you have to be looking at it with the right kind of light. Che-Hsuan Cheng, a doctoral student in material science and engineering in Deotare's group and the first author on the study in Advanced Optical Materials, is most interested in its application as self-erasing invisible ink for sending secret messages.

The stretched azobenzene naturally gives up its stored energy over the course of about seven days in the dark--a time that can be shortened with exposure to heat and light, or lengthened if stored in a cold, dark place. Whatever was written on the chip, be it an authentication bar code or a secret message, would disappear when the azobenzene stopped stretching the semiconductor. Alternatively, it can be erased all at once with a flash of blue light. Once erased, the chip can record a new message or bar code.

The semiconductor itself is a "beyond graphene" material, said Deotare, as it has many similarities with the Nobel Prize-winning nanomaterial. But it can also do something graphene can't: It emits light in particular frequencies.

Then, the chip went to Deotare's lab to be layered with the semiconductor. Using the "Scotch tape" method, Cheng essentially put sticky tape on a chunk of the semiconductor, tungsten diselenide, and used it to draw off single layers of the material: a sandwich of a single layer of tungsten atoms between two layers of selenium atoms. He used a kind of stamp to transfer the semiconductor onto the azobenzene-coated chip.

Next steps for the research include extending the amount of time that the material can keep the message intact for use as an anti-counterfeit measure.