The measure would phase out coolants in air conditioners and refrigerators considered a major driver of global warming. 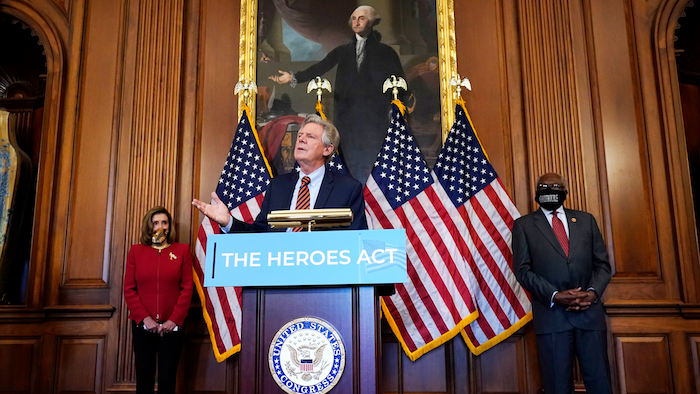 WASHINGTON (AP) — The House has approved a modest bill to promote “clean energy” and increase energy efficiency while phasing out the use of coolants in air conditioners and refrigerators that are considered a major driver of global warming.

The House approved the bill, 220-185, Thursday, sending it to the Senate, where a separate energy bill is pending. The Senate bill, like the House measure, would phase out hydrofluorocarbons, or HFCs, that are used as coolants, after an internal dispute among Senate Republicans was resolved earlier this month. Use of HFC gases is being phased out worldwide.

“I want to give a clear-eyed assessment: This bill is not going to stop climate change,” said Rep. Paul Tonko, D-N.Y. “But it is a good opportunity to make good and sometimes necessary changes to programs, which might make it easier to do a bigger, more ambitious bill in the near future.”

Supporters said it would create well-paying jobs across the country and help the U.S. transition to a “clean energy future” that is less dependent on fossil fuels such as oil and natural gas.

The bill would authorize more than $36 billion to help speed up the electrification of the transportation sector and make electric cars an option for more communities. It also authorizes funding for “clean” school buses, electric vehicle charging equipment and other zero-emission vehicle programs.

Rep. Frank Pallone, D-N.J., chairman of the House Energy and Commerce Committee, said the legislation would "modernize our energy system, create jobs and take positive steps towards addressing the climate crisis.'' He called it "one of the most impactful steps we can take now to create manufacturing jobs and boost our competitiveness, all while protecting our environment.''

Pallone said he and other lawmakers who pushed for the energy package tried to “move provisions we believe have a shot at becoming law this Congress” after negotiations with the Senate.

House Republicans disputed that, saying the bill would cost more than $135 billion while including no serious reforms.

“Don’t be fooled by its name — this bill has little to do with innovation and everything to do with House Democrats’ embrace of their high-cost Green New Deal," Republican Reps. Greg Walden of Oregon, Rob Bishop of Utah and Frank Lucas of Oklahoma said in a joint statement. Walden is the top Republican on the Energy and Commerce panel, while Bishop leads the GOP on Natural Resources and Lucas is the top Republican on the House Science panel.

While many Democrats have expressed support for the Green New Deal — a non-binding but ambitious plan to eliminate net greenhouse gas emissions by 2030 — Speaker Nancy Pelosi has not brought the plan to the House floor. Pelosi and other Democrats announced a climate change plan in June that would set a goal of net-zero greenhouse gas emissions by 2050. Democrats also would spend billions to boost renewable energy and address environmental contamination that disproportionately harms low-income and minority communities.

The bill approved Thursday, while more limited in scope, still "is chock-full of government mandates that would raise what Americans pay for everything from the vehicles they drive to what they pay to heat, cool and power their homes,'' the three Republicans said. ”At a time when so many families across the country are struggling, this bill includes back-door bailouts for cities with outsized grant programs that leave rural communities behind. This massive package fails American consumers, plain and simple.''

Eighteen Democrats voted against the bill, while seven Republicans voted for it.